It was hard for me to find a multilingual sign around the neighborhood I live in currently (Deer Park, Suffolk County). I’ve lived in the city my whole life up until recently so I wasn’t to familiar with the linguistic landscape myself, but I realized that at my job we have customers that come from all over the world because the prices for clothes is cheaper here rather than their home country. Being that we get a diverse mix of customers I realized a sign above me that was speaking to four different languages. The sign consisted in only one base color (white) and printed in English, Spanish, French and Chinese, but English seemed to be the base language in the center of the sign.The rest of the languages where below the English words and was in a much smaller print than the English. As I analyzed the sign it made sense to say that predominately English speaking people tend to visited the store more frequently than others, but the order in which the languages were placed defiantly stood out to me. The order of the languages from top to bottom read from first English, then Spanish, French and lastly Chinese. Based off the time I’ve been working at the store I’ve been able to recall what I subconsciously observed who our customers tend to be. Like before, English is the predominate language in the area but second to that comes Spanish. French and Chinese seem to be either one or the other.

The index of the sign initially tells me that the message is more expressed and enthused with the English due to the style of how it was presented, as for the other languages where smaller and somewhat unrecognizable if you don’t pay close attention. Then I thought about the linguistic landscape and realized that the neighborhood tends to be mainly White and Spanish, which makes sense why the first two languages on the sign were English and then Spanish. Sometimes I have to call on a co-worker to help and translate English to Spanish for proper customer service. One other thing that the sign does show me is that even though the other three languages aside from English are less noticeable, that the store acknowledges that we attract more then just what the neighborhood holds in its population.

in conclusion to this analysis, there is a lot of diverse people that come to the store. our location is still new so maybe in soon enough time the signs will start to evolve into more languages. 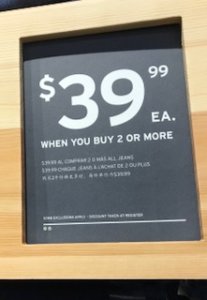