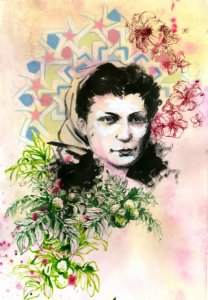 Puerto Rico’s most famous poet and greatest literary figure, Julia De Burgos (1914-1953) is as significant a cultural icon for the island. Every line of De Burgos’s verse is imbued with passion, feminist self-assertion, and love of homeland. As with many female artists, De Burgos’s life story added to her legend, though her romantic life and untimely death threatened to overshadow her work by turning her into an allegorical figure for the patria’s humiliations. Yet, outside of Puerto Rican communities, she is largely unknown despite the fact that her poetry, while firmly rooted in place, addresses the universal human subjects of love, war, and self-creation.

De Burgos’s life spanned Puerto Rico’s full entrenchment as a colony of the United States, while her public life as a writer took place against the backdrop of the twentieth century’s global conflict between fascism and democracy. The problems Puerto Ricans face today, as their impoverished island fights for survival in an era when the international order seems to be coming apart, are the legacy of the struggles De Burgos faced.

In Puerto Rico and the US, her name adorns two parks, six monuments, seven buildings, five schools, a shelter for battered women, and an arts center in East Harlem’s El Barrio, opposite a wall showcasing a mosaic of her face. During her final days, De Burgos wrote to her sister: “It honors and satisfies me that while the government of this country repudiates me for struggling for the welfare of humanity, including its own people, my Puerto Rican gente honor and protect me, materially and spiritually.”

The New York Review of Books

Rio Grande de Loiza!… Elongate yourself in my spirit
and let my soul lose itself in your rivulets,
finding the fountain that robbed you as a child
and in a crazed impulse returned you to the path.

Coil yourself upon my lips and let me drink you,
to feel you mine for a brief moment,
to hide you from the world and hide you in yourself,
to hear astonished voices in the mouth of the wind.

Dismount for a moment from the loin of the earth,
and search for the intimate secret in my desires;
confuse yourself in the flight of my bird fantasy,
and leave a rose of water in my dreams.

Rio Grande de Loiza!… My wellspring, my river
since the maternal petal lifted me to the world;
my pale desires came down in you from the craggy hills
to find new furrows;
and my childhood was all a poem in the river,
and a river in the poem of my first dreams.

Adolescence arrived. Life surprised me
pinned to the widest part of your eternal voyage;
and I was yours a thousand times, and in a beautiful romance
you awoke my soul and kissed my body.

Were did you take the waters that bathed
my body in a sun blossom recently opened?

Who knows on what remote Mediterranean shore
some faun shall be possessing me!

Who knows in what rainfall of what far land
I shall be spilling to open new furrows;
or perhaps, tired of biting hearts
I shall be freezing in icicles!

Most sovereign river mine. Man river. The only man
who has kissed my soul upon kissing my body.

Rio Grande de Loiza!… Great river. Great flood of tears.
The greatest of all our island’s tears
save those greater that come from the eyes
of my soul for my enslaved people.

Cristina Pérez Díaz (San Juan, 1985) is a poet, playwright and the founding editor of the Puerto Rico Review (www.thepuertoricoreview.com). She is a Ph.D. candidate in classical philology at Columbia University, where she specializes in Greek theater and poetry. She holds a Master in Philosophy from the Universidad Autónoma de México. Cristina writes irregularly a column for En Rojo of the Puerto Rican weekly Claridad. Her first collection of poems, Adentro crián pájaros, was published in the Parawa art publishing house (Santurce, 2016). With La Impresora (2016) she produced an edition of one hundred copies of a series of four poems and drawings, New Imaginary Anatomy. She has published poems in the digital magazines ViceVersa, Enclave, Eterna Cadencia and Círculo de Poesía. Her poetry appears in the Mundo Mosgo (Parawa, 2015) and Cross-border anthologies (Punto de Partida, 2016). Her play Western, starring Antigone and Her Siblings, premiered in June 2016 at the El Flamboyán Theater (Lower East Side, Manhattan), directed by Javier Antonio González with members of the Caborca company.

.In “Río Grande de Loíza” Julia De Burgos works with a complex metaphor, “el río,” that could symbolize both a lover and the country of Puerto Rico. Expand.

.Pérez Díaz in “I look for brooks,” re-signify words and stanzas from “Río Grande de Loíza.” The “re-writing” method looks to turn the poem upside down, now the man-river -and the poet-  are looking for Julia de Burgos and her literary legacy. Give some details.