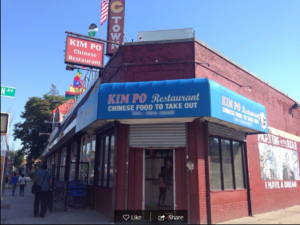 In my prominently English neighborhood there’s a single Chinese food restaurant called “Kim Po”. The store is located at Farmers Boulevard in Saint Albans Queens, not too far from where I live. My reason for choosing this sign (besides the fact that it happens to be one of the only signs near my house that’s in a different language) is simple, it’s a store I frequent as well as the very first thing I see when I cross the street to go to the supermarket located right next to it.

While banner is mostly in English, the actual name is in Chinese (though the words uses the Latin alphabet rather than Chinese characters). The banner itself is a bright eye catching blue with all of the English text being in white. However, the restaurant name is in a red color that clashes directly with the blue, drawing the eye to it. I believe this is a way for anyone passing by to be able to easily tell what the store is called, thus remembering it and possibly returning in the future. The reason why the sign is mostly in English is most likely because of what I stated previously, the neighborhood is prominently English so it only makes sense that the sign should be mostly in the language that’s spoken the most in the neighborhood.

The sign, much like the building, is rather simple and homely. However, this is not inherently a bad thing. Farmers Boulevard is is a simple, quiet neighborhood. People going about their business prefer to get what they seek and return to their day. They aren’t interested in anything flashy or over the top. This is reflected in the surrounding neighborhood. To the right of the store (as well as a local C-Town supermarket it shared a building with) is a lengthy row of houses going on and on for many blocks. There is also an elementary school directly in front of it (it’s a block away but still in front nonetheless). Students like to visit for a quick after school meal and families like to visit for an out of house meal.

To conclude, this store has been a part of this neighborhood for quite some time. Though the name of the restaurant and the people inside are both Chinese, people are still able to communicate and get what it is they want.

#1 Did I follow the rubric well or did I go off topic?

#2 What can I do to make this essay better, especially regarding my conclusion.