“William Labov was a 30-something-year old working as an industrial chemist when he started wondering about something. In his dealings with people, he had noticed, first of all, that people spoke English differently from one other. Perhaps even more curiously, he observed that often the same person would speak variably (e.g., pronounce words differently or use different vocabulary) at different times and with different people. So curious was he about the phenomenon of linguistic variation, that he returned to school (Columbia University) to study linguistics. He earned his PhD in 1964 (he was 37), and went on to found the field of variationist sociolinguistics…”

This is (a brief version of) the story I tell my students in Introduction to Language when we get to the chapter on sociolinguistics. I like telling it because in addition to drawing them into the topic, the story of Labov resonates with the values that are meaningful to the students: curiosity, persistence, taking a non-traditional path, and a commitment to learning.

Last year, the week I was scheduled to guest-teach the chapter on sociolinguistics in my mentor’s class coincided with the 46th annual conference on New Ways of Analyzing Variation (NWAV), which was started by Bill Labov. This was going to be my first time participating at this conference, and also my first time presenting a conference poster. It occurred to me that the  students might find the content more accessible if I introduced it to them via the research process that I had just completed. And so, kind of at the last minute, I decided to use some of the class time to initiate students into the process. After demonstrating my just-completed poster, I asked them to form small groups and to think of a linguistic variable, preferably one they’ve observed in their own communities, that they would like to find out more about. I then invited them to consider what social variables (age, gender, region, group identity, sexuality, etc.) might be associated with its use (or non-use). Finally, I advised them to choose a location in which to conduct their hypothetical research and to design an experiment that would test the hypothesis.

While I had not allowed sufficient time to do justice to this small project the first time around, I was so impressed with the students’ ideas that the following semester I devoted an entire class to this project. The class culminated in a poster session, in which one member of every group gave a short explanation of the poster they had created based on their project. This week I utilized this lesson plan for the third time. I believe that the collaborative and active nature of the task helped the students gain a deep understanding of the content. They were very proud of their work, and when I invited them in for a group photo to use in this blog post, two groups happily complied. The posters are pictured below, grouped by semester (spring and fall).

In the last four minutes of class, we watched this powerful TED talk by Jamila Lysicott, which homes in on the central themes of the course: language attitudes and social justice.

The only god of language is the one recorded in the genesis of this world saying “it is good” (Jamila Lysicott, 2014) 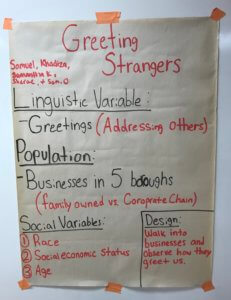 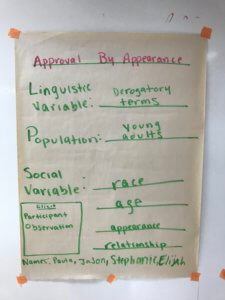 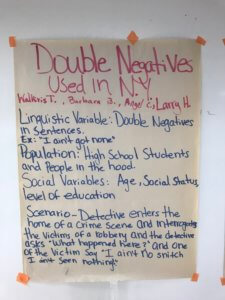 Use of double negatives 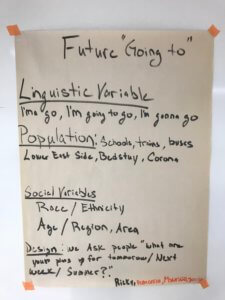 Forms of future ‘going to’ 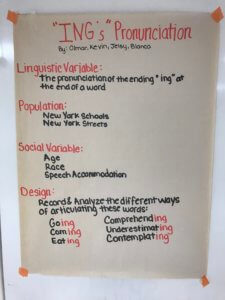 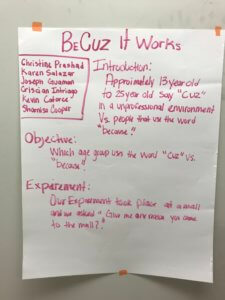 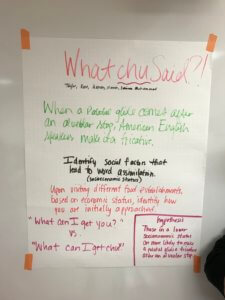 Pronunciation of ‘you’ following a palatal glide 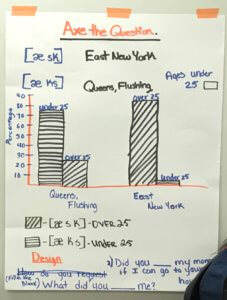 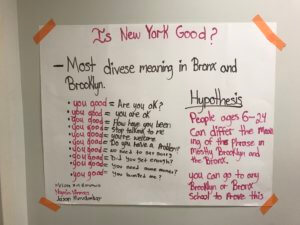 Variable meaning of ‘you good’ 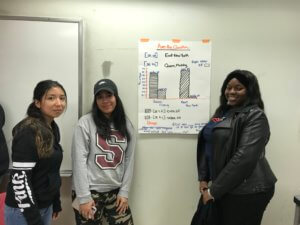 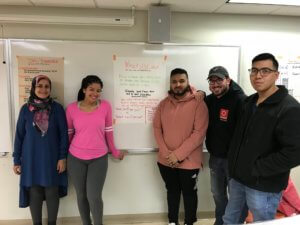 This is a picture of Bill Labov (with his wife, Gillian Sankoff) at NWAV 47 (October 2018, NYC), as he came into the room in which I was about to present my research on Hasidic Yiddish vowels. 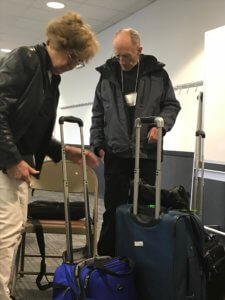 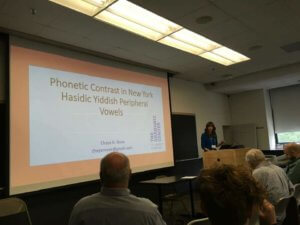