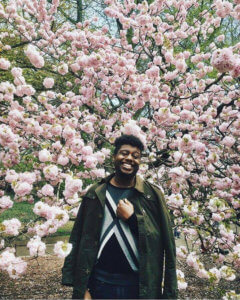 Last semester, Derrick Austin was kind enough to headline (as he aptly put it) a “queer and fabulous” poetry reading for my Humanities Alliance-supported Writing Through Literature class at LaGuardia Community College. I knew it would be a highly engaging event. After all, I had seen students’ lively response to Austin’s poetry and prose as assigned reading in the course. In particular Austin’s essay “In the Name of the Femme: A Queer Boy’s Voyage With Sailor Moon” provided a guide for student essays on the creative relationships of fandoms to marginalized identities. Even so, I felt somewhat taken aback by the depth of the conversation elicited by the event, the topics of which spanned everything from writing tips and the ethics of close reading to Drake’s role as a poetic muse in Austin’s recent poems. And so I intended for this interview to reiterate and encapsulate some of the questions posed by the students, for them and for a larger audience. Our discussion reads as follows.

But, first, more about Derrick Austin.

Austin is the author of the poetry collection Trouble the Water (BOA Editions, 2016), winner of the A. Poulin Jr. Poetry Prize. Trouble the Water explores, among other themes, the radical contingency of the self. As Mary Szybist writes in her foreword: “The life of the body matters deeply in this collection, and the life of the body unfolds in a world in which not all bodies and desires are equally valued and protected. Austin never loses sight of the realities of social injustice and environmental trauma.” Metaphysical yet deeply grounded, Austin’s work explores, in his words, “what it means to be fully human as a queer, black body.”

Austin has also appeared in numerous venues including Best American Poetry, New England Review, Image: A Journal of Arts and Religion, Nimrod, Tupelo Quarterly, and Blavity. He received his MFA from the University of Michigan, is an Assistant Poetry Editor at Memorious and served as the 2016-2017 Ron Wallace Poetry Fellow at the Wisconsin Institute of Creative Writing. 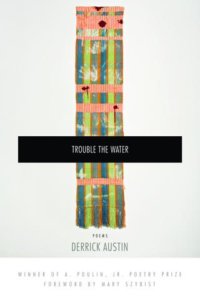 MR: First, I want to thank you for reading to my Writing Through Literature class. I’m sure you remember the lively and lengthy Q+A conversation after the reading, and so for this interview I primarily want to echo some of the questions students posed. Many were especially interested in the basics: how one decides to become a poet and why. So, let’s just start there: how did you decide you wanted to become a poet and why?

DA: I came to poetry in high school like a lot of folks. I had too many feelings and wrote them down. I entertained ideas of being a writer when I was young, but I thought I’d write fiction since that’s all I read. The page was a safe space for me to explore my sexuality, to be the person I couldn’t yet be in my day to day life. A space where I could question and explore. A space where I could carefully consider my words. I was painfully shy then and writing let me say what I needed to say in an ideal environment. Then I just followed poetry into college and grad school. The economy was trash so I figured, if I’m gonna be broke at least let me have studied something I love. And the surprising thing about being an English major is that it’s basically a degree in hustling: knowing how to use language is a skill!

MR: In the course, the students were introduced to your work through your Sailor Moon essay and poems “Silver Millennium” and “The Lost Woods as an Elegy for Black Childhood,” all of which link “nerdy” fandoms to black and queer experience. Could you speak to this connection in your work?

DA: So much of literature replies upon myth and sometimes I think of fandom as a kind of personal mythos. Allusions to classical myth, The Bible, or history operate just like references to manga, pop music, or video games: they’re the public in the personal, the communal details that help define a particular experience. I’m always bored by people who say don’t write about current events or pop culture as if The Illiad isn’t a war poem or Paradise Lost isn’t political; as if all literature is full of current events that we need footnotes for; as if humans aren’t ridiculously cyclical and the news doesn’t repeat; as if we don’t have Google.

MR: And, of course, we all want to know more about your ongoing series of Drake poems. Why Drake?

DA: It started as a joke. In grad school, my crush on Drake was a running gag among my friends. One of them dared me to write a poem about him, which I resisted. What was I gonna write about other than how I wanted him to do obscene things to me? But my first Drake poem ended up being an exploration of masculinity, tenderness, and vulnerability. Drake, well his persona and music more than the man, perhaps, is such an interesting pop culture figure. He’s a living meme. He’s silly and corny and earnest. His persona relies upon the disavowal of toxic masculinity while leaning into those behaviors at the same time (his attitude toward women leaves much to be desired, among other trash behaviors). Right now I have six Drake poems and I’ve found they’re a portrait of my shifting attitudes about him.

MR: One student asked a memorable question about the disconnect between attending a poetry reading (or, I guess, experiencing art more generally) and the potentially sterile reading techniques (like close reading) taught in college classrooms, which risk portraying reading as an intellectual act rather than a sensuous one. Maybe framing the question in this way replays the problem the student identified. [Laughs.] But I think this question refused the separation of “good” writing from race, class, and gender or the idea that studying English is about some standard of “correctness,” all of which ultimately connects to the whiteness of the discipline. What are your thoughts about this question?

DA: Well this isn’t a small question at all. [Laughs.] Art is both sensuous and intellectual and when we talk about art we should reflect on both things. The art we love pleases us first. We don’t listen to a song and hear every lyric and understand all its intricacies; we first like a song because it makes us wanna get up and dance. We like a movie’s gorgeous costumes and only later realize that the costume design reflects each character’s emotional states. So often students are frustrated by close reading because it’s a way to identify rhetorical techniques (which is important). They talk about craft as if it’s divorced from pleasure or subject matter. Poems as math problems. Close reading can be a wonderful way to discuss how poems give pleasure, how poems explore or erase class, race, sexuality, gender, etc. Sometimes the pleasure is flat or deceptive. Sometimes the pleasure is violent or painful. We can’t divorce craft from subject matter. Craft reveals how a particular poems pays attention to the world, and paying attention to the world is the way of the artist. Close reading is a way to help us see that.

MR: Finally, what’s your writing process like? It being a composition class, the students weren’t going to let you off the hook without sharing some craft tips.

DA: I wish I could say I were one of those writers that had a strict schedule but I don’t. Our writing schedules change as our life and work does, which is why I find all those admonitions to write every day to be so useless. Write in the way that works for your life. Don’t feel ashamed if you can’t write as much as you want to. There’s jobs, school, beloveds, family, friends, ourselves! There’s so much to attend to. Find your rhythm. In undergrad and grad school, I used to write at night because I had no classes and I wasn’t out with friends. Now I find myself writing in the morning before I start my work. Our writing lives change as our lives do. What stays the same though: Read, read, read. Read everything. Read thoroughly. Take your time with your poems. Who cares what’s popular? Follow your creativity.