Making the Classroom an Object of Inquiry 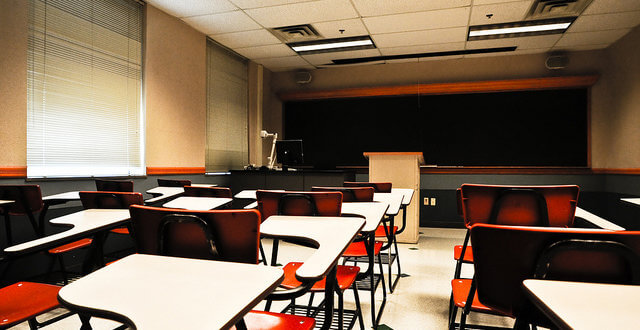 In working on my syllabi for next semester, I have been thinking about the connections (and disconnections) between constructing non-canonical courses and the actual spaces in which learning takes place. After all, even the most critical of pedagogical intentions often fall humbled before the actual conditions of classrooms. Likewise, subversive intentions in course content don’t necessarily guarantee a subversive classroom experience, as even in my own teaching, I have sometimes found myself sliding against my will into current-traditional pedagogical guises.

Paulo Freire’s notion of the “fear of freedom” has been on my mind, which describes how individual classes sometimes fall short of genuinely liberatory pedagogic goals because of anxiety about the possibility of “chaos” and “disorder.” Revisiting Pedagogy of the Oppressed[1], I have been struck by how Freire considers this “fear of freedom” as a significantly a question of spatial aesthetics rather than course content. Freire is more concerned with the “narrative” structure of the traditional classroom, which he famously described as one in which the teacher acts as a “narrating Subject” while ideal students act as “patient, listening Objects.” While centering marginalized and non-canonical voices is obviously necessary, Freire warns that even the most inclusive class at the level of content may at the same time reproduce a host of different oppressive conditions. If the goal is a decolonized classroom, then, for me, Freire prompts a reflection on how classroom spaces work to (or fail to) disrupt the traditional classroom “narrative,” an intrinsically self-critical endeavor.

Often and early-on in my writing classes, I introduce the concept of “close reading” by asking students to perform this kind of analysis on the classroom itself. I have a few practical goals here: for example, to expand students’ notion of textuality beyond literary discourse, and even beyond text as synonymous with the written word. But, more importantly, I want to provoke a reading of the spatial rhetoric of the current-traditional classroom—a reality that precedes even the most spatially creative classes and requires constant dismantling. So I’ll pose a number of questions to them: how have your classrooms usually been arranged? What does this classroom (not me, the classroom!) “argue” about how your time is best spent? What performance does the room (again, not me!) demand of your body and mind? What would your ideal classroom look like?

The traditionally multi-rowed classroom, of course, delivers fairly transparent answers to most of these questions: “Don’t speak—except to the instructor, at their request. Listen. Consume. At best take notes. Be ready to regurgitate what you hear. Your primary texts, you won’t need them, and there’s no desk space for them anyway. That back-of-a-head in front of you, don’t speak to it. And don’t bother looking for a clock on the wall: I know you’d rather be anywhere than here.” And so on. The spatial rhetoric of the current-traditional classroom, after all, demands a particular performance of the body that is fundamentally objectifying, masculinist, ableist, and Eurocentric. And this prior to any consideration of content.

As Ira Shor points out in his exploration of what he calls “deep Siberia”[2]—the far-back rows of the classroom that some students try disappearing into—changing your positionality as an instructor doesn’t always deconstruct a classroom’s power dynamics. For example, when Shor himself experiments with teaching, unannounced, from deep Siberia, he finds the class reorienting itself automatically: “Siberia” has now effectively become the front of the class. I have noticed this same issue when working in a circle—that, though it encourages more student-to-student conversation, this classroom arrangement sometimes reverts to the same old center of power: the “narrating” teacher.

I find that this dynamic changes, however, when students themselves decide to take control of classroom space. Once students are invited to treat the classroom as an object of critique, they often themselves elect to rearrange their desks, usually in a circle, some messy trapezoid, or my personal favorite, the squiggly organism with a few lone hold-outs in the middle. In one memorable iteration of this activity, the students demanded that I remove the necktie I happened to be wearing, which they deemed a rhetorical marker of the teacher-student power relationship. I obviously obliged—and have never worn a tie to class since. Other times, however, students vote to remain in traditional rows. But whatever their choice, I hope to have invited them to become active critics of the structural conditions of teaching and learning. Rearranging the classroom, therefore, is not just a strategy for coaxing a “better” student performance, but denotes a “textual” analysis of what kinds of performances individual classrooms rhetorically demand. I also see “close reading” the classroom as a trust-building exercise between myself and my students: making it known that, even if I fail to create a more liberating classroom space, that I intend to and value their critiques.

I want to reiterate that I’m not talking about any one classroom at any one institution, but rather the current-traditional rhetoric of classroom space that precedes every learning space. Students negotiate and resist this rhetoric in a multitude of forms: sometimes progressive, sometimes reactionary; sometimes through vocal confrontations, sometimes with active silence. The challenge to myself going forward is not to fear this “disorder,” but instead to consider ways I can mobilize it toward the construction of a more fundamentally empowered and empowering class. 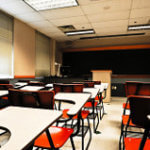