Learning and Teaching in Fear

Earlier this week, I witnessed a heated exchange at my local grocery store. One of the cashiers and a doorman from a nearby apartment building talked fervently about the Las Vegas shooting, a terrifying and senseless attack which left 58 people dead and over 500 wounded. One of them compared the assailant’s arsenal of weapons to the one of “a man ready to go to war,” while the other saw the shooting as a sign of an impending end of the world. The other signs, he claimed, were the recent three hurricanes that struck the U.S. territory and the deadly earthquake in Mexico in September. We could, of course, add many more items to that list: North Korean nuclear crisis, Russian election meddling and the ensuing return to Cold War politics, ISIS, as well as the rise of the far right in the U.S. and in Europe, to name just a few.

Leaving the question of the end of the world aside, what the grocery store exchange and the above examples evidence is that a certain condition of fear seems to have become an indispensable element of our everyday life. It is difficult to pinpoint when exactly that phenomenon developed in the modern Western society; perhaps it dates back to the early 1960s, the rise of mass media, and the fear of nuclear annihilation following the end of World War II. Perhaps it started even earlier. In any case, the rise of the Internet and the subsequent social media boom have certainly not helped to mitigate that condition. Moreover, the proliferation of digital imagery—bombarding one with gory and fear-inducing pictures daily—only further exacerbates it. One thus wonders about the extent to which modern-day fear permeates the classroom. In response, it seems fairly easy to create an academic bubble of sorts; shying away from the problems of the real world, one can remain focused on the course curriculum. And maybe some students would even enjoy it: a respite from everyday fears and anxieties, the classroom would offer them an opportunity to temporarily forget the outside world.

Yet, classroom debate and sustained engagement with the outside world are of critical importance. That sort of debate, I would argue, seems especially necessary in community colleges. Since majority of community college students come from underprivileged backgrounds, they are often made to believe that their voice—even if heard—is unlikely to make an impact. A quick look at the recently published data, however, proves that social mobility in community colleges is not fake news, while students can actually propel themselves into the higher social strata and succeed. In humanities-related subjects in particular, we must ensure that our students are not only equipped with knowledge, but that they have also developed a set of critical thinking skills and confidence necessary to thrive in the contemporary society. In other words, we need to aim to help them become fully functioning agents of the challenging modern-day world. If the condition of fear has indeed permeated our everyday life, then we owe it to our students to give them tools to combat that fear and—forgive the cliché—inspire them to believe that they can make a change. 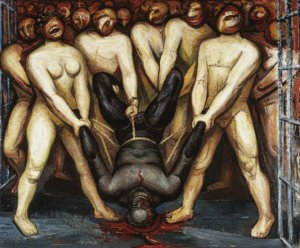 We should not shy away from engaging in the complex topical issues in the classroom. The seemingly petrifying condition of fear can be used conversely to generate thought-provoking debate and help students leave college with more self-confidence. Taking the example of art history—a humanities discipline that abounds with images of power, images of human suffering, images of war, images of political propaganda, to mention just a few of the concerns raised above—one can find effective ways to stimulate a classroom debate that touches upon contemporary issues and permits the students to voice their opinions. Moreover, it will help them become better at examining visual evidence and discerning key aspects of endless media imagery they are being barraged with everyday.