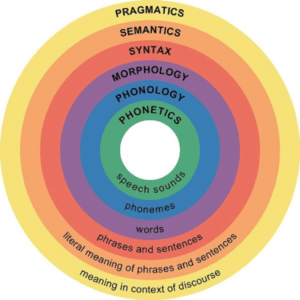 Students in the Introduction to Language class I am observing this semester had a homework assignment on the first day of classes: “Look up the word ‘language’ and bring a definition to class. Report which dictionary you consulted.” In response to this prompt, several students cited the Oxford English Dictionary. When asked why they chose this one, one student commented: “Because it’s British, so they know the English language. I mean, English is from there.” The rest of the students nodded in agreement. This remark from a first-time student of linguistics really brought home to me the many reasons why it is so crucial, in my opinion, for all college students to take a course in linguistics.

Tell anyone you’re getting a PhD in linguistics and they’ll probably look puzzled and ask, “what exactly is linguistics?” When you explain it is the study of language, they will usually do one or all of these things:

One of the really nice things about being a linguist is that you can have a conversation with anyone related to the topic you are working on. Human adults generally have at least two decades of experience speaking a language, which makes them feel like they can speak intelligently about the topic. And to some degree, they can. Every native speaker of a language learns it perfectly, which is why, in linguistics, we often use native speaker judgements, the implicit knowledge that speakers have about their language, as the basis for our studies. Why, then, the self-consciousness and/or the righteous indignation about speaking the language “properly?” It relates to explicit knowledge of language, and the cultural attitudes about the language that speakers absorb as part of their language socialization.

Starting in grade school, speakers are taught a host of “rules” about their native languages – dos and don’ts based on arbitrary conventions that were established at some point in the recent past by people in power. These rules have nothing to do with how the language is actually spoken. They might proscribe, for example, ending sentences with prepositions or using double negatives, constructions that abound in everyday conversation. These guidelines are also unrelated to the implicit rules that speakers know about the language, for example knowing instinctively when the plural –s of a word sounds like “sss” (e.g., in “forks”) and when it sounds like “zzz” (e.g., in “spoons”). Another example: Most native speakers can tell you that the adjectives in the sentence “seven rambling short middle-aged Graduate Center philosophy professors” would sound awkward if they were ordered in any other way, but they probably can’t tell you why.

Languages or dialects typically vary along regional and social boundaries. That is, no speech community speaks a language exactly like another. Each has its own conventions regarding sounds, word meanings and how words are combined into sentences. For instance, trace the pronunciation of the vowel in “caught” from the west to the east coast in the U.S. and you will experience a range of sounds starting with one that sounds exactly like the vowel in “cot,” [kat] and ending with something like “cawt” [kɔt]. And while utterances like “I hate sushi anymore” (positive anymore) or “I might could do it this weekend” (modal stacking) are perfectly acceptable in some dialects of English, they might sound quaint, stilted or ungrammatical to people who speak other English dialects.

This leads us to cultural attitudes about languages. Societies tend to create and perpetuate ideologies that situate some of its members in the center and relegate others to societal margins. Those in the center wield most of the power, including control of educational and political institutions. It is no coincidence that the explicit grammar rules of a language overwhelmingly reflect the way it is spoken by the group in power. This language variety becomes known as the “standard,” and is held up as the ideal that all speakers of the language should aspire to. Most people don’t realize that the ideal variety, the “standard,” doesn’t actually exist. Yet because it is so closely aligned with the way the people in power talk, the prestige of the dialect and the group that speaks it are mutually reinforcing. The features of the language variety become, in the words of linguistic anthropologist Jillian Cavanaugh, “things in the world,” cultural capital for the attainment of social status. Conversely, features of the minority dialect become objects of social “otherness,” establishing and perpetuating the marginality of its speakers. This paves the way for linguistic discrimination, which is sometimes direct, but more often subtle. It is a socially sanctioned version of classism, racism and xenophobia, perpetuating inequality and systematically barring speakers of minority dialects from accessing socially privileged spaces.

Thus, students in our community colleges, overwhelmingly members of minoritized cultural and ethnic groups, enter our classrooms convinced that they speak a deficient form of English. They have bought into an ideology that privileges some dialects, such as British English, and denigrates the varieties spoken in their own communities. Consequently, a course in linguistics becomes more than an intellectual enterprise. In teaching our students about phonetics, phonology, morphology and syntax, we can also help them interrogate the cultural attitudes they’ve encountered regarding language in the real world. A linguistics that is free of value judgments focuses on systematicity in all varieties, showing students that their English is not random or grammatically inconsistent, only different. And while we as instructors cannot change the social power dynamics, we can make them transparent. Armed with this information, our students can become agents of change.