What are you willing to risk for your education? For the major you would like to study, or your preferred career? What would you risk to follow your path, or pursue your dreams?

The inaugural cohort of LaGuardia Mellon Humanities Scholars has been grappling with these questions during the 2016-2017 academic year, while exploring this year’s program theme of “Risk.” Last week, the Scholars exhibited the projects they had been working on in a curated showcase at LaGuardia’s Black Box Theater. The showcase was intended not only to reflect the students’ learning over the past year, as they developed their projects with the help of faculty mentors, but to prompt the audience to reflect on their own understanding and assumptions about the students’ diverse fields of study.

Over the course of two hours, the Scholars led groups of participants in a carefully orchestrated tour of their projects, which spanned a number of disciplines—from education, to public health, to media studies, to literature—but which all similarly employed humanistic modes of inquiry to pursue vital, exciting, and original research questions. The meaning and value of education–from early childhood to college and beyond–was a parallel theme running through each project.

Below, we’ve included an overview of the Scholars’ projects, along with some photos of the event and links to the students’ work where available. Please take a look, and let us know what you think via the comments section below!

Anabell Arteaga’s project on “Daycare Lesson Plans” presented activities that develop social and emotional skills in young children. She emphasized the importance of early childhood education in preparing children to live in a multicultural society. A part-time student and full-time parent, Anabell is a pursuing an associate degree in Childhood Bilingual Education. 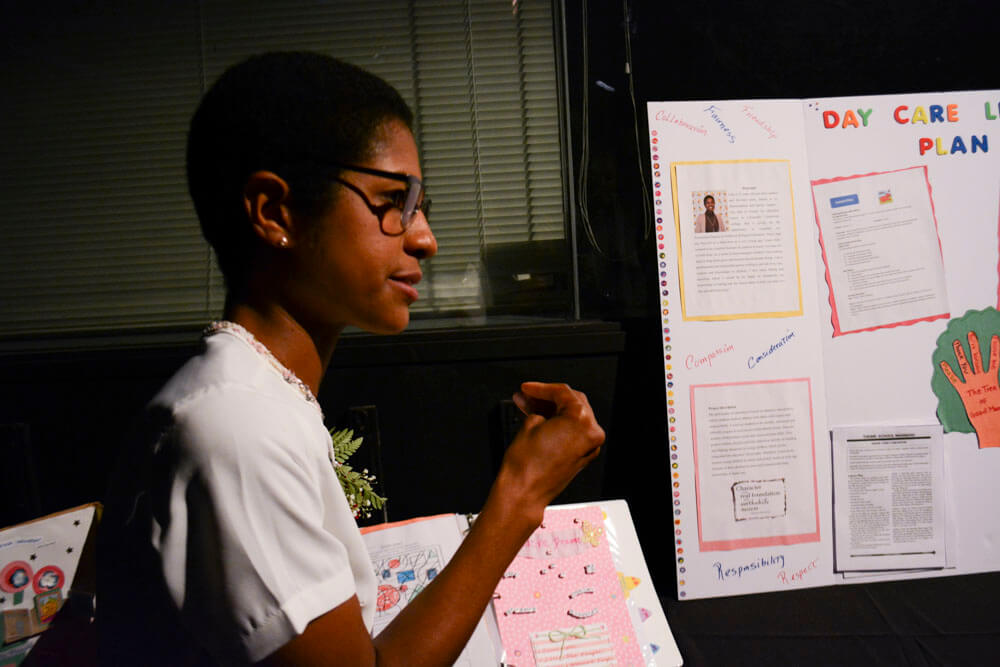 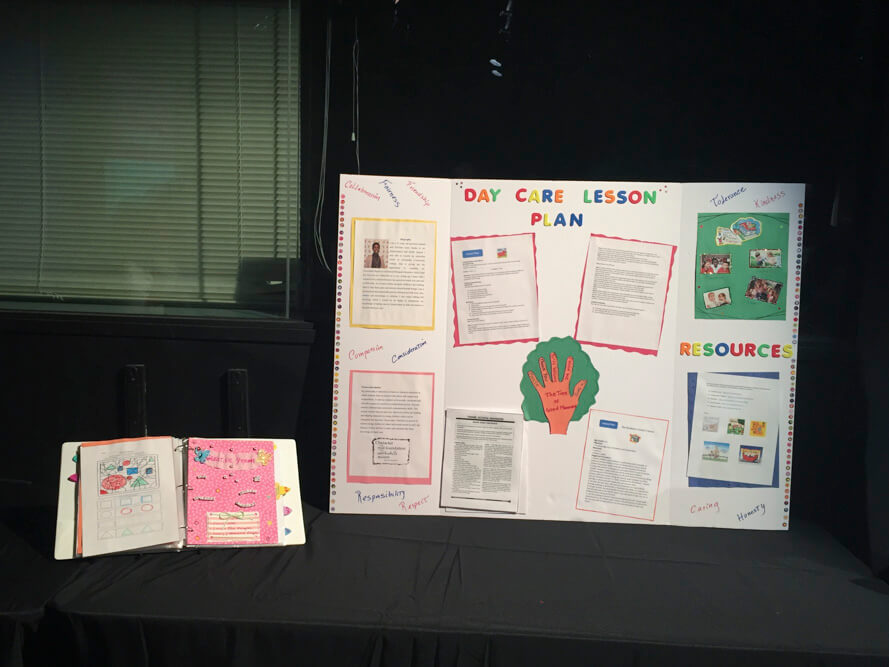 Gisela Galvis’s video presentation, “Focusing Education on Learning,” critiqued the traditional education system that emphasizes rote memorization and test-taking, and argued for childhood education that focuses on holistic, interactive, and experiential learning. Participants were encouraged to reflect on these critiques via political cartoons about educational standards and testing. Gisela is a Special Early Childhood Education major at LaGuardia, and a mother of two children. She hopes to pursue a teaching certification and a master’s degree in Special Education. 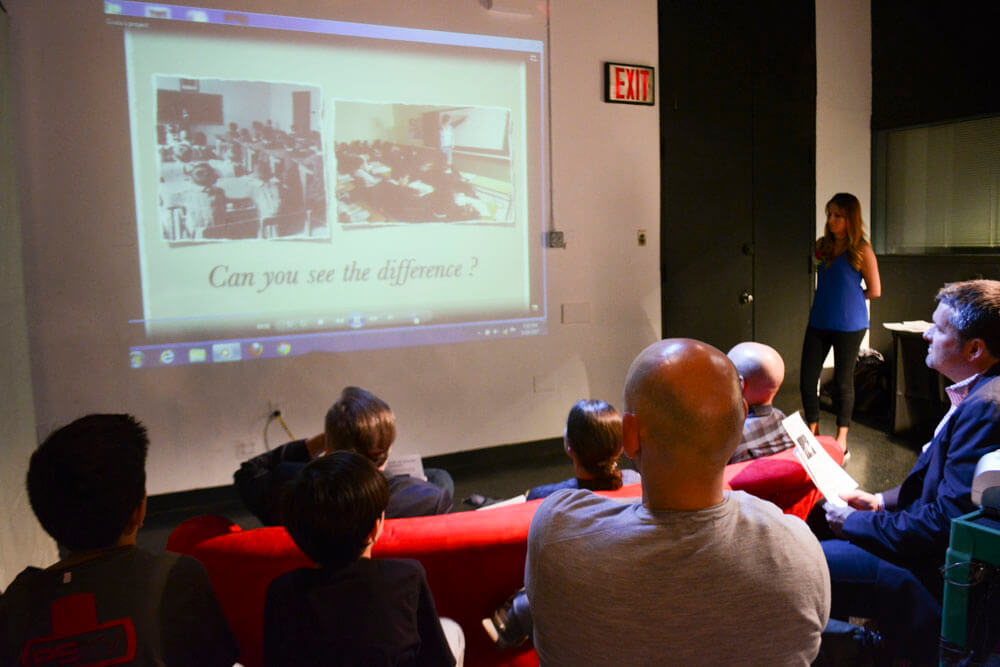 Florence (Flo) Maxine Pil’s project, “Let’s Talk About Sex Education,” considered the realities of sex education in America, and emphasized the importance of comprehensive sex education. Participants watched a clip from Last Week Tonight with John Oliver, and created a word cloud in response to a question about what they were missing in their sex education. Flo is pursuing an associate degree in Nursing at LaGuardia. 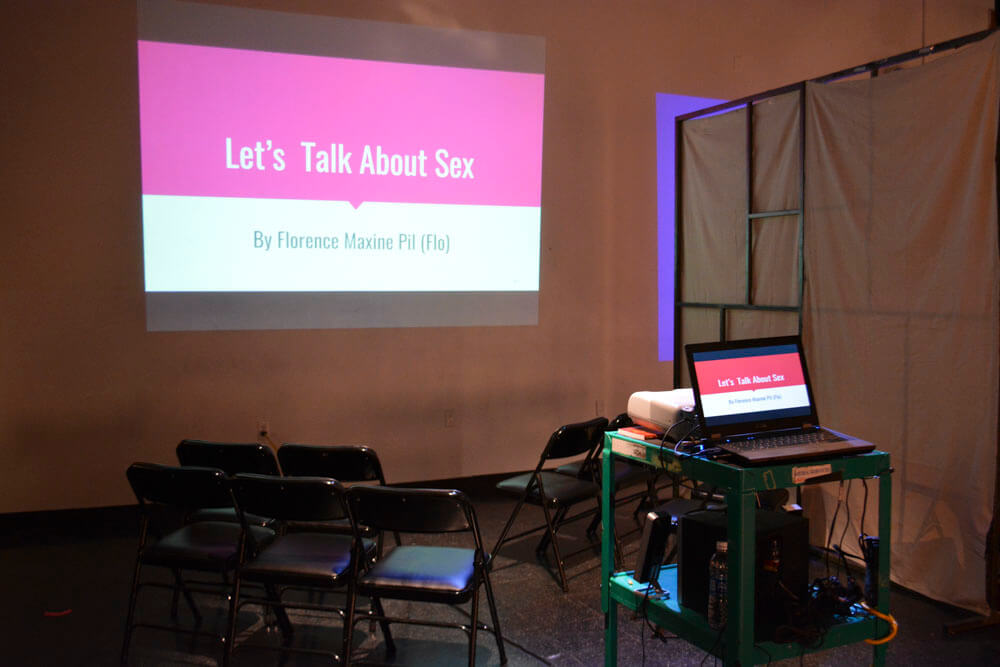 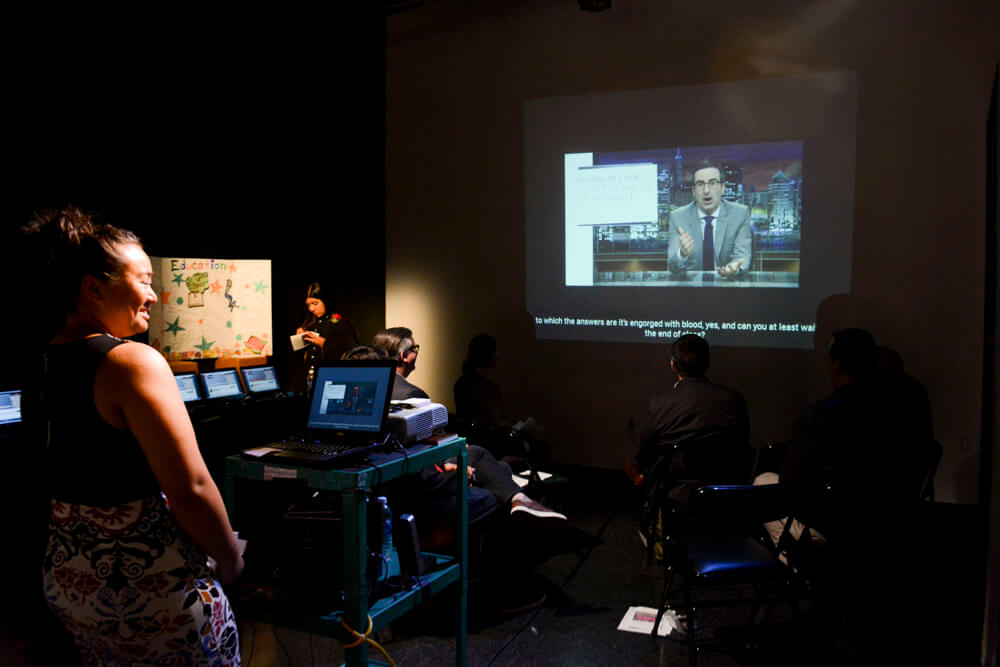 Florence Maxine Pil screening a video during the Showcase. Photo by Kitana Ananda.

Lorena Alatorre’s project, “The Value of Teachers,” presented interviews of students and teachers, from elementary school through college, to encourage showcase visitors to see the importance of teachers and how students see their teachers. Attendees listened to these interviews on laptops set up alongside a poster presentation. Lorena graduated from LaGuardia this year with a degree in Early Childhood Education, and is transferring to Hunter College, CUNY, to pursue a bachelor’s degree in education.

Lorena Alatorre standing next to her poster on education. Photo by Kitana Ananda

In “Get My Good Side,” Paula Moreno invited participants to confront stereotypes by presenting assumptions through text and images used in the media to represent a country (Colombia, which is also her country of origin), a continent (Africa), and a region (the Middle East). 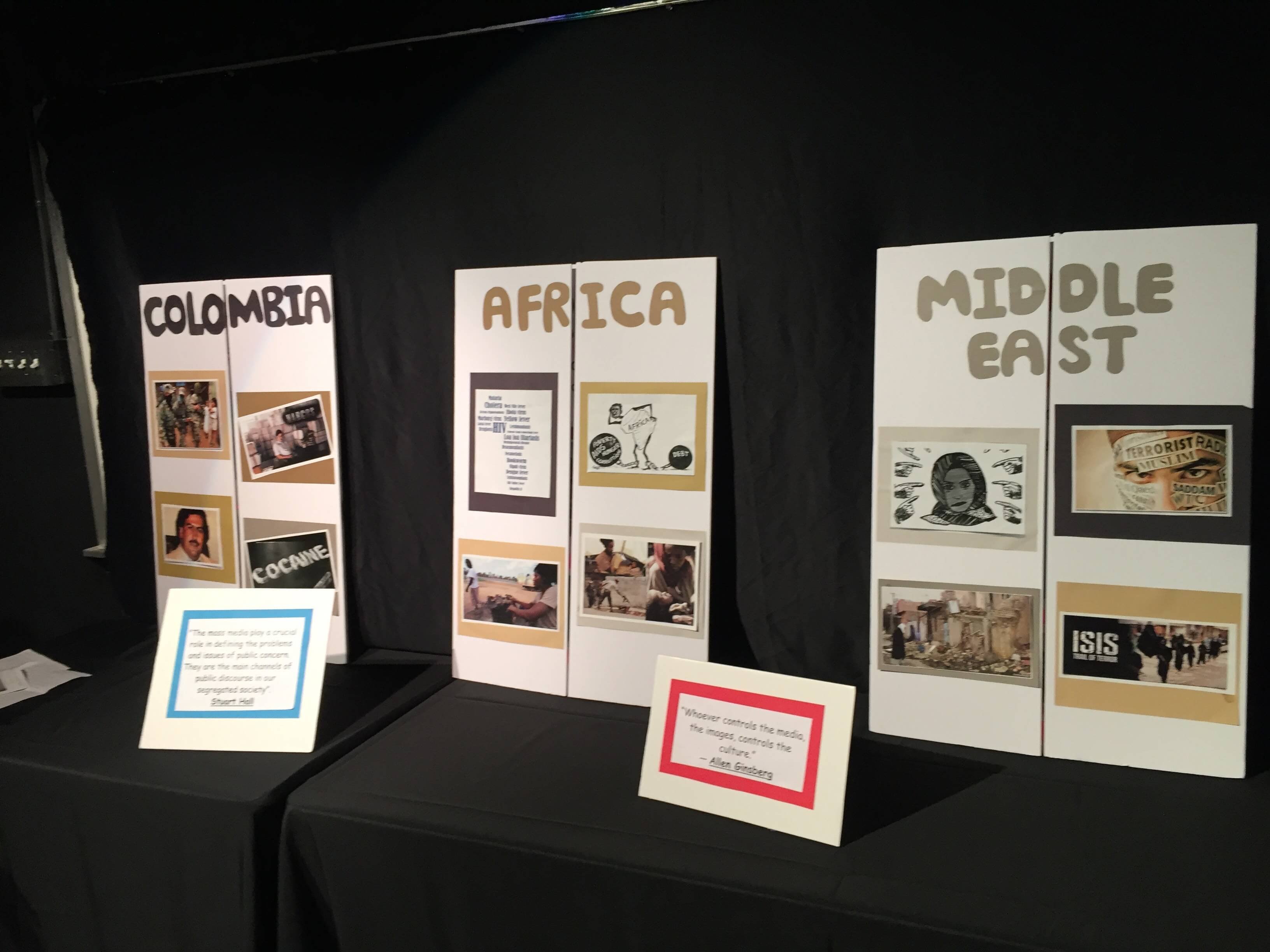 Posters depicting common stereotypes about different countries and regions of the world. Photo by Elizabeth Alsop.

Paula’s project then countered these stereotypes with alternative images and additional information about the history, culture, and politics of each place presented. Paula is pursuing an associate degree in business administration at LaGuardia, and hopes to earn a bachelor’s degree in accounting. 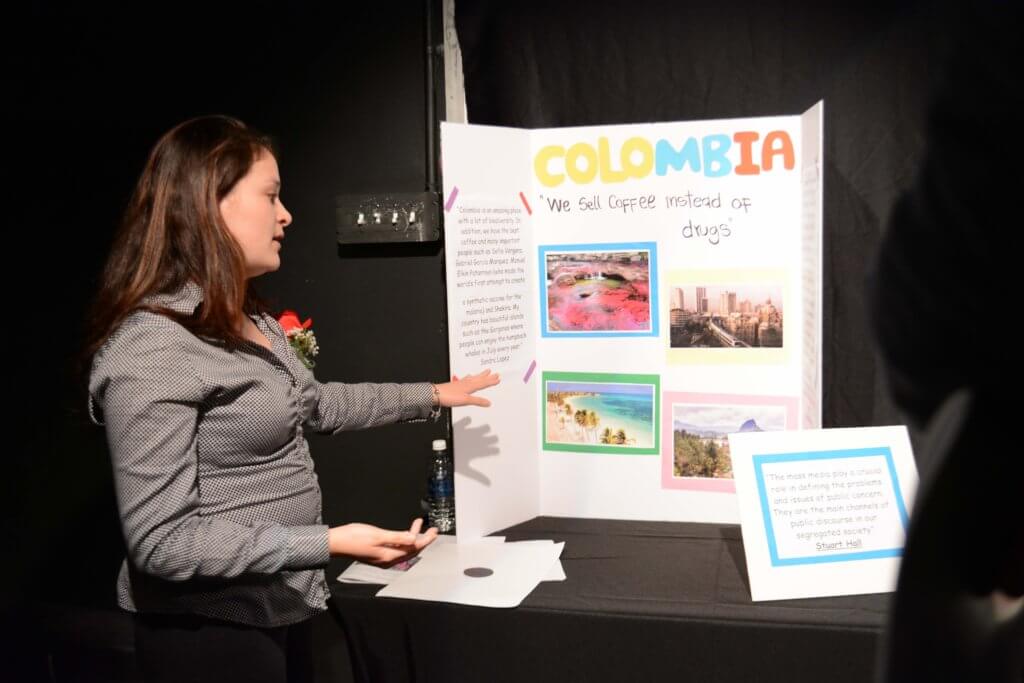 Paula Moreno presenting other images and information about Colombia. Photo by Kitana Ananda.

Ivan Taurisano’s project, “Choosing Knowledge: Taking the Risk for Your Future” capped the showcase with poetry inspired by the other Scholars’ projects. His poems provoked readers to consider, as he wrote, “what it means when you choose knowledge in your life, what happens when you don’t choose knowledge, and how to confront ignorance.” Ivan graduated from LaGuardia this year with a degree in criminal justice, and is transferring to John Jay College of Criminal Justice, CUNY, to pursue a bachelor’s degree in philosophy. He plans to go to law school to become a lawyer. 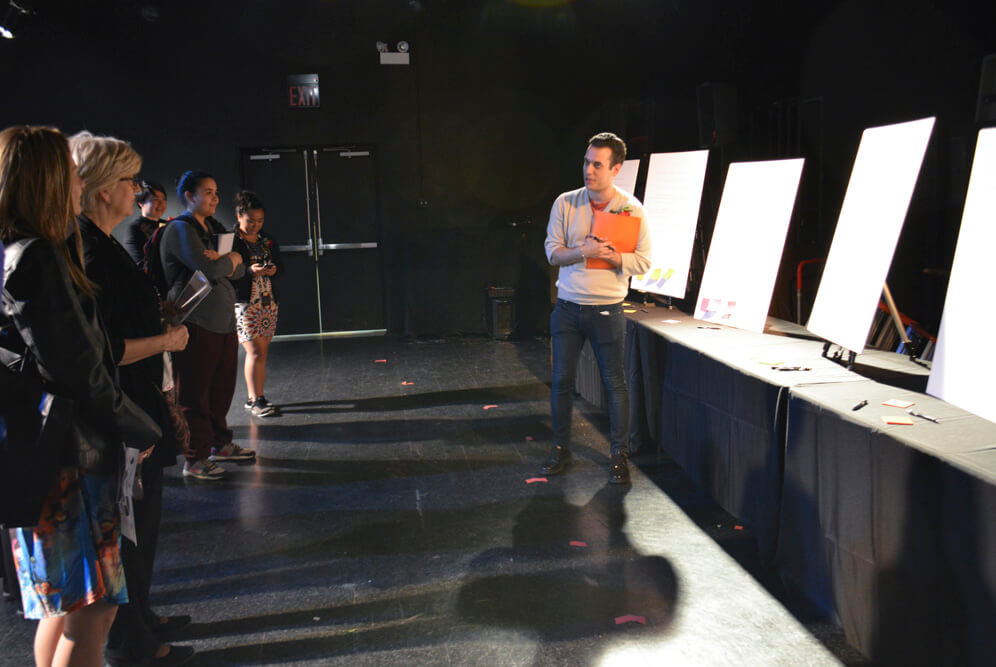 Ivan Taurisano presenting his poems to a group. Photo by Kitana Ananda. 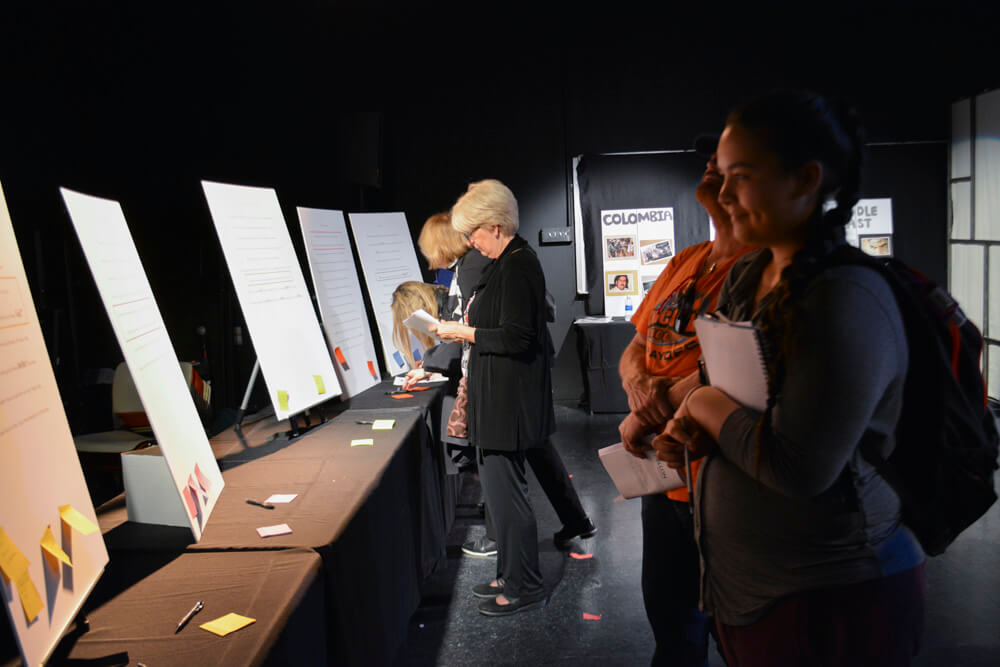 The showcase concluded with a reception, where awards were distributed to each of the the Scholars. Congratulations to our Scholars, and to everyone for a wonderful year! 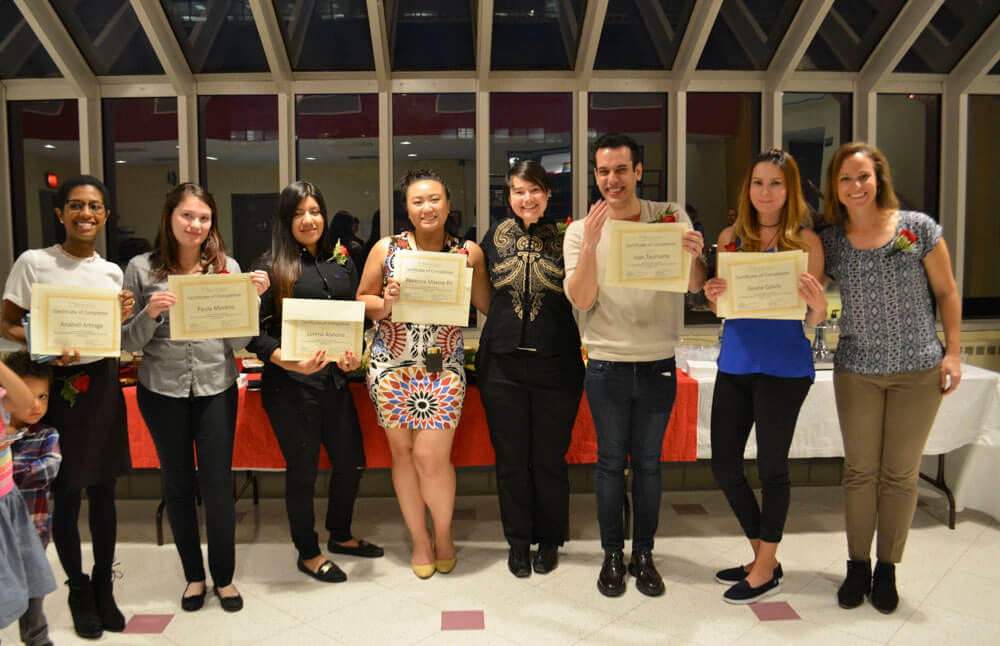 The LaGuardia Mellon Humanities Scholars is a part of the CUNY Humanities Alliance, and works with LaGuardia students to enrich their understanding of the humanities and build their academic and career pathways. To learn more about the program and this year’s cohort, click here.

The Scholars and the CUNY Humanities Alliance are generously supported by the Andrew W. Mellon Foundation. The Showcase was also made possible by Michael Alifanz and the LaGuardia Theatre Program. A special thank you to our faculty mentors–Kitana Ananda, David S. Bimbi, Jeremy Couillard, Dahlia Elsayed, Jennifer Polish, Jaime Riccio, and Rosemary Talmadge–for encouraging, advising, and supporting our Scholars.