Through a new two-year fellowship program as part of the Humanities Alliance, nine Graduate Center students will have the opportunity to learn with master faculty and as they teach at LaGuardia Community College. Representing a wide range of disciplines, backgrounds, and experiences, the Humanities Alliance Teaching Fellows will bring the program to life as they work with faculty mentors, administrators, and students at LaGuardia Community College.

The following doctoral students have been selected as the inaugural
cohort of Humanities Alliance Teaching Fellows: Cory Greene is a formerly Incarcerated organizer for the Center for NuLeadership on Urban Solutions (CNUS) and The Incarceration to Education Coalition (IEC). He graduated from the Applied Psychology program at NYU’s Steinhardt school of Culture, Education, and Human Development in 2013. He is one of the co-founders of How Our Lives Link Altogether! (H.O.L.L.A!), an organization dedicated to youth leadership development, radical healing, youth organizing, and community empowerment with historically marginalized youth of color. Greene is a student in the Critical Social Personality Psychology doctoral program at the Graduate Center of CUNY where he plans to engage in/with participatory action research: an epistemology and practice that challenges inequalities, normative assumptions of “the normal,” and promotes social/human justice! Makeba Lavan is a doctoral student in the Department of English at the Graduate Center, CUNY. There, her research focuses on (African) American Studies, Speculative Fiction and Popular Culture. In addition to her studies, she also teaches at Lehman College. José Alfredo Menjivar is a poet, writer, educator, activist, doctoral student in the Urban Education program at The Graduate Center, CUNY and instructor across NYC universities. His scholarship centers on how race, class, gender, sexuality, language and citizenship fundamentally shape and mark the ways folks of color exist, participate, negotiate and navigate the word and the world. He is the organizer of Affirmations: Honoring Self & Community Care for & with Educators of Color (https://www.facebook.com/AFFIRMATIONSEoC) and his writing can be found on http://josealfredomenjivar.com[josealfredomenjivar.com]. 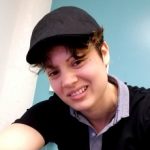