Exploring the Languages of the Himalayas–in Queens

What do you notice as you walk through the main streets of your neighborhood? Do you instinctively see only the signs that are written in a language you know, or do you also stop to consider those written in a language you don’t recognize? Who is reading those signs? What do you know about the languages and cultures represented in your own backyard?

Last week, ELL101 (Introduction to Language at LaGuardia Community College) set out to find out more about the languages and cultures that have taken up residence in Jackson Heights, Queens (the most linguistically diverse zip code in the United States). Led by two dynamic tour guides from the Endangered Language Association (ELA), Nawang Tsering Gurung and Ross Perlin, we walked down the streets and connected with the Voices of the Himalayas.

Our first stop was the beautiful Sherpa Temple on the corner of 75th Street and 41st Avenue, where we gathered on the staircase and talked about linguistic diversity. Ross mentioned the fact that New York was not only the most linguistically diverse city in the world today, but possibly in the history of the world! We reviewed language facts such as how many languages exist in the world today (linguists estimate between 5000 and 8000) and what distinguishes a language from a dialect (it’s hard to say, but the criteria that are used are often based on politics). Then our tour guides introduced us to the languages spoken in the Himalayas, the mountainous region in Asia that includes Mount Everest. 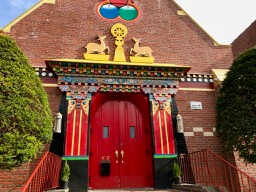 Inside the temple, we watched as a sizable group of community elders (with some children in tow) gathered to pray. We listened in on a sermon delivered in Tibetan, observed the use of special prayer wheels, took in the vibrantly colored décor, and scanned the signs advertising cultural events in multiple languages that are posted on the wall. 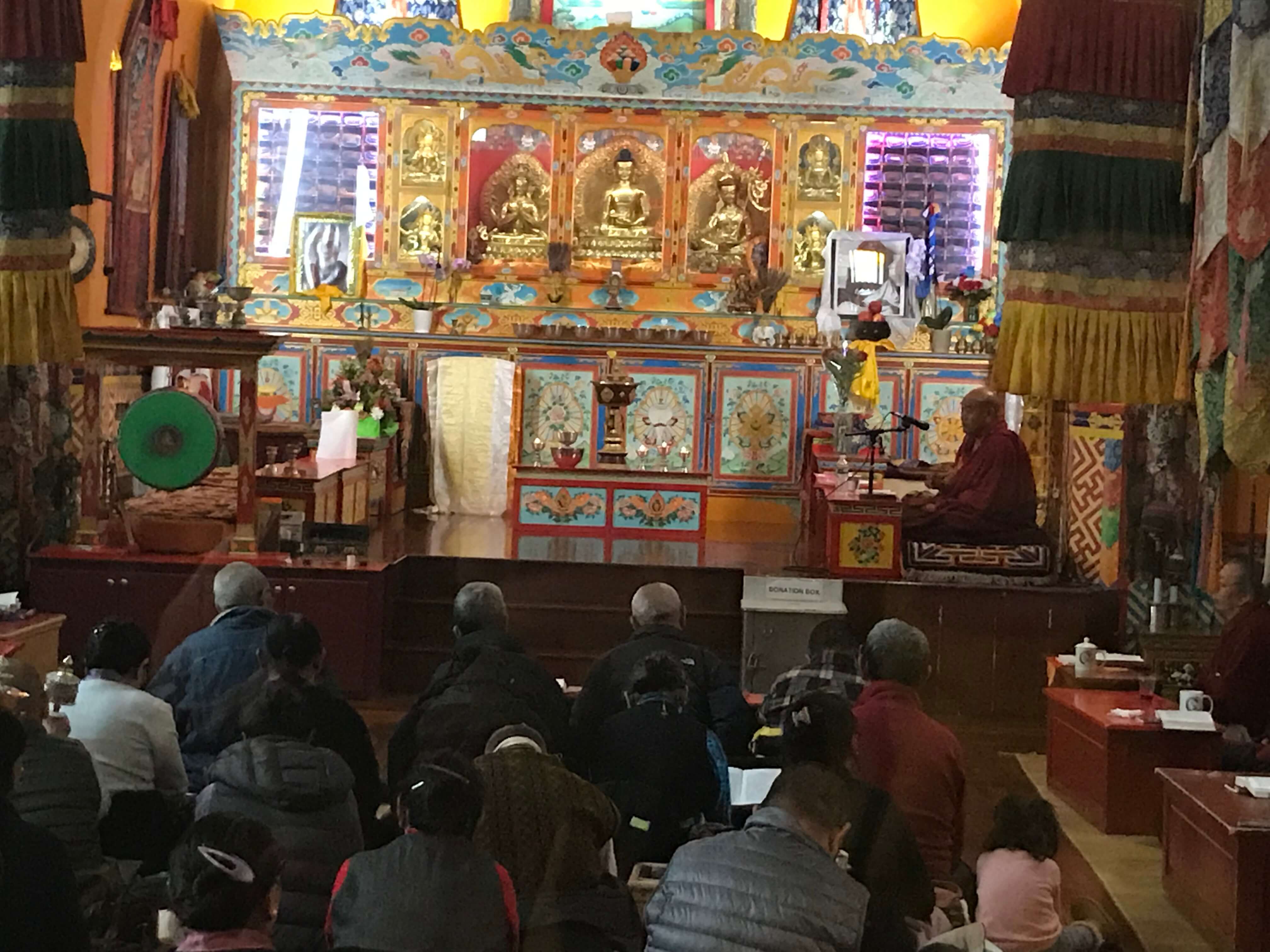 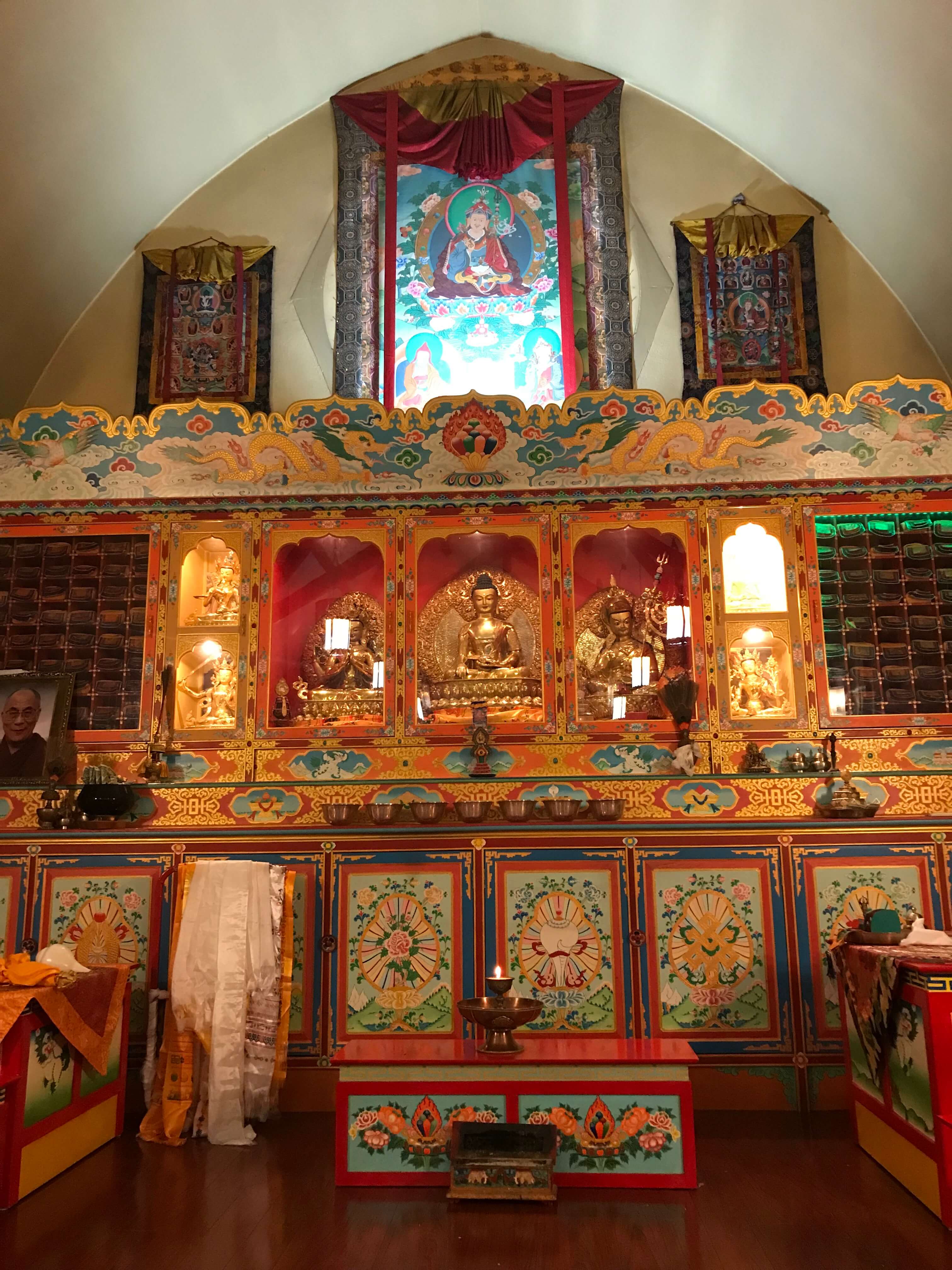 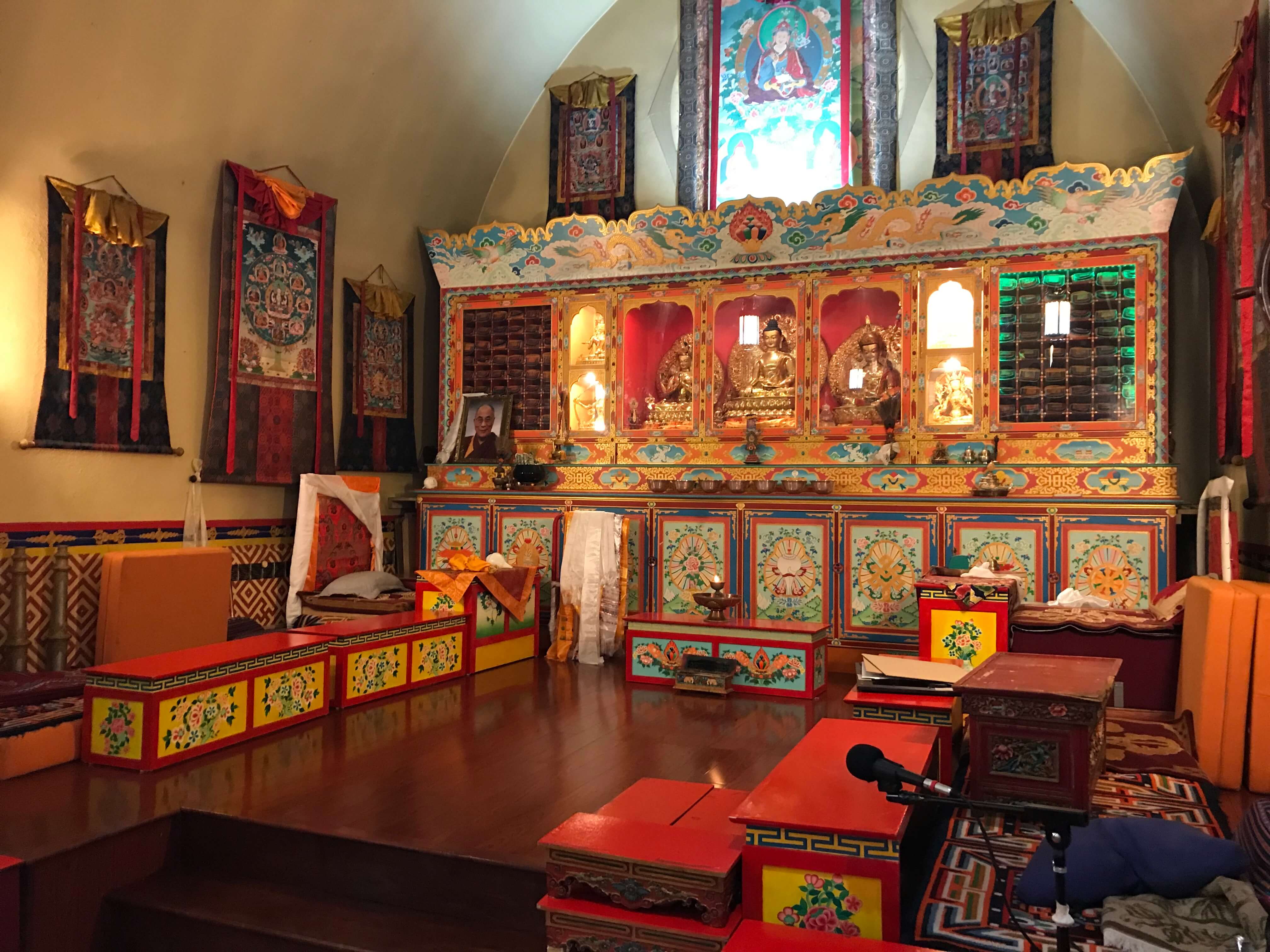 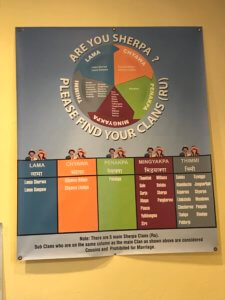 As we crossed the intersection to get to the next site, the guide directed our attention to the linguistic landscape. A sign on a corner pharmacy represented six of the languages spoken in the area. 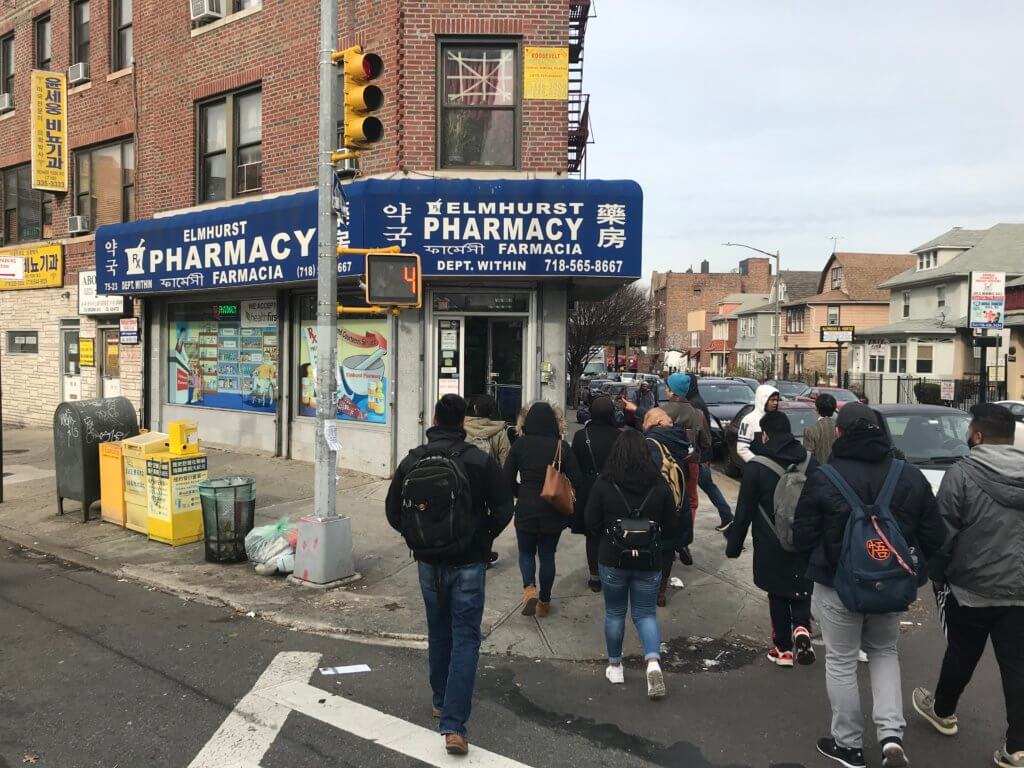 In the Barkhor gift shop (whose proceeds support the program for the elders we had witnessed in action earlier), we saw an array of items for sale representing Himalayan/Tibetan culture: Tsampa (roasted barley flour), a dramyin (Tibetan guitar), Tibetan boots in exquisite colors, and of course, tote bags and stationary bearing inspirational messages in fine calligraphy. 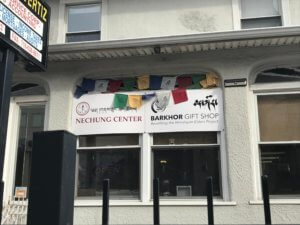 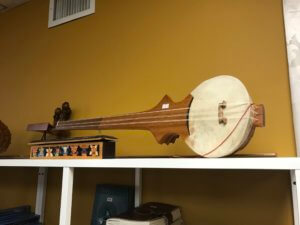 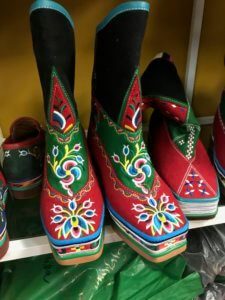 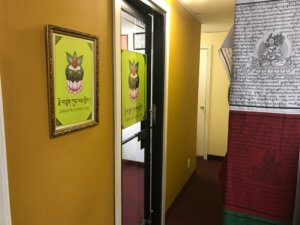 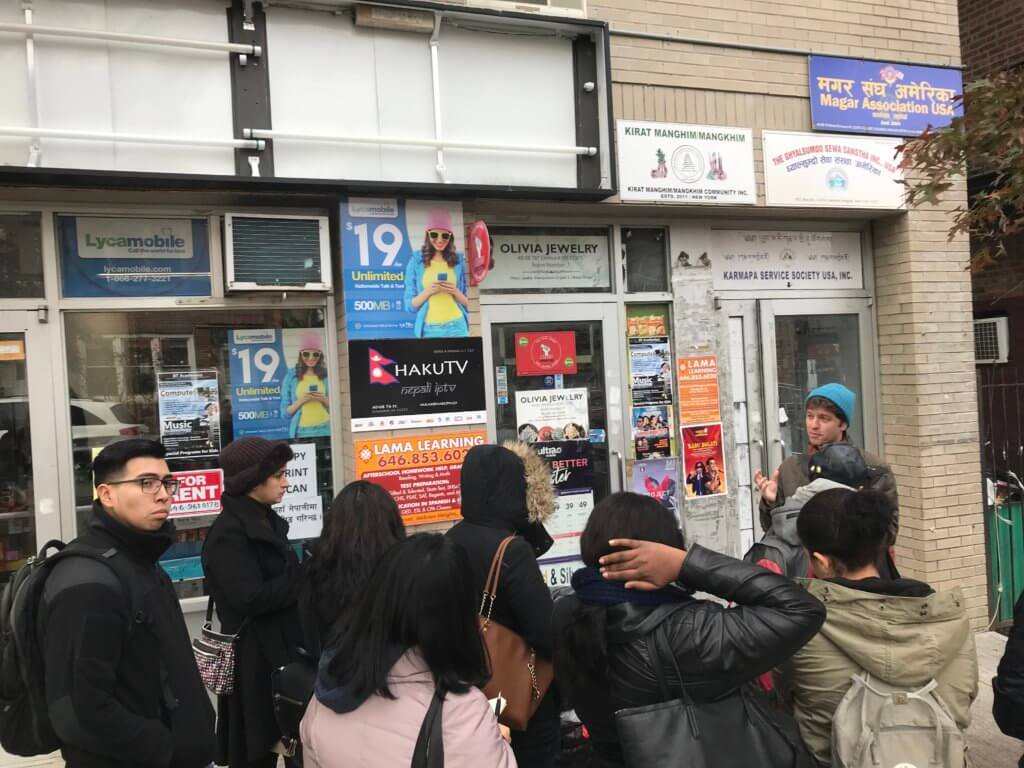 Stopping outside a local community center, we talked about how immigrant communities often form alliances and collaborate with each other to ensure that members of their communities have access to employment opportunities, medical services, education; but also, to preserve and protect the native culture and its traditions. Here too, the signage highlights the cultural and linguistic diversity of the region.

Many students were familiar with Patel Brothers, the supermarket we passed on our way that sells a wide variety of authentic ingredients from regions all around the world. 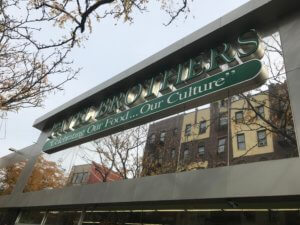 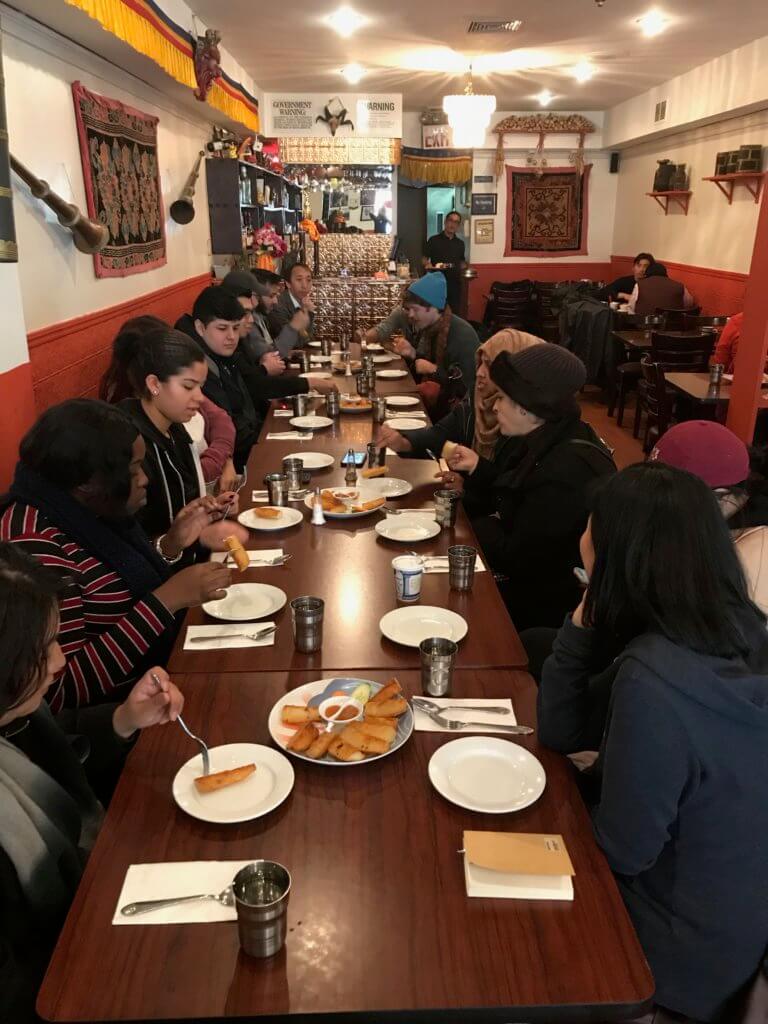 All this talk about food, along with the delicious smells emanating from various ethnic food establishments, was making us hungry! Fortunately, we were only steps away from our final destination: Mustang Thakali Kitchen. As Nawang explained the décor, the waiters brought out steaming plates of authentic delicious foods from the Mustang region of Nepal, including chicken lollipops, beef and vegetable momos with chutney, steamed buns and chili chicken. The conversation continued at a slower pace as we filled up on the wonderful food, and processed the sights and sounds we had taken in. 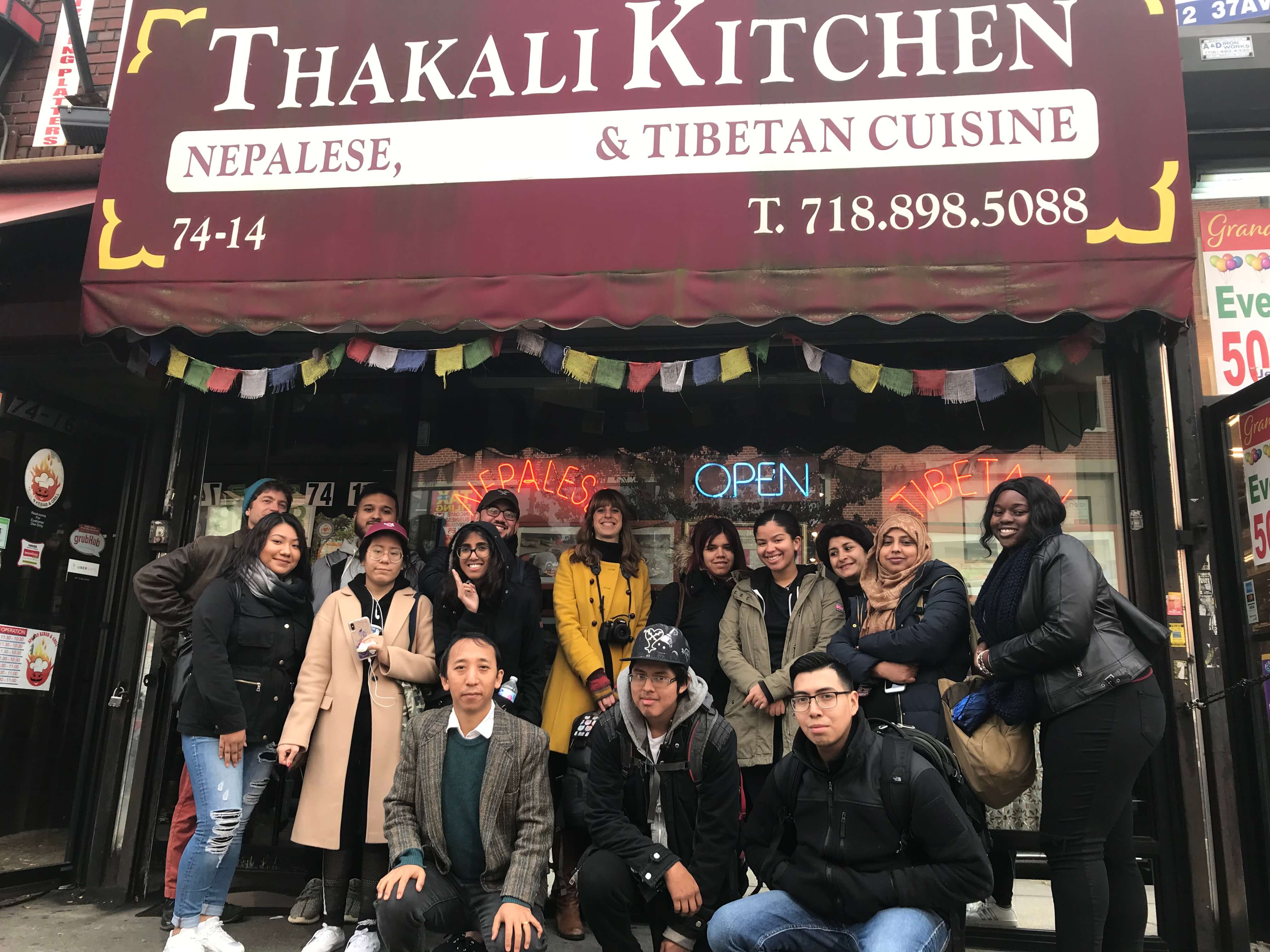 Students reported that the trip had taught them many new and interesting things about minority languages and about Queens:

Speakers of the same language get together and form associations to help people from their country.

Some small languages don’t have dictionaries.

Those who visit the Sherpa temple remove their shoes and pray while seated on the floor. They also use prayer wheels.

I live around the corner and I never noticed the different languages in store fronts.

Jackson heights has become more diverse than I remembered.

That the building five blocks from my house was a Sherpa temple, that Nepalese food is delicious, and how languages are combined during the elders event so that all can understand.

As for their favorite parts, here’s some of what the students had to say:

My favorite part was when we visited the Himalayan’s worshipping place and learned about a different culture and how people speaking different languages can live together.

My favorite part of the trip was going inside the temple because we were able to see how people pray and learned about the things involving their culture.

My favorite part of the trip was visiting the temple because it gave an insight on how other people practice their religion.

The temple!! Seeing how other people pray and how different it is from my praying style.

My favorite part of the trip was eating lunch at Nepalese & Tibetan Cuisine restaurant with my other peers and instructor. I was excited to taste Nepalese food! I always thought the Nepalese food was different from Bengali, but I was surprised to see that the food was similar.

I liked all parts of the trip almost equally. However, having lunch together definitely tops the other parts. Having lunch together allowed us to discuss all the things we saw and talked about previously. The incorporation of food, an important part of learning about a different culture, also allowed for more interesting conversations.

Learning something new about my neighborhood and of course trying a few new dishes from another country.

The best part of the trip was the walk around the community such as the temple, the store, the supermarket and the restaurant.

Posts
Toward Pedagogical Transparency
The Importance of Pausing: How Check-Ins Create A Classroom Culture of Openness