“You can see that it is a joy for me to talk about this!”

I sat down with Prof. Hernández on May 24, 2017, to talk about her path to LaGuardia, her forty-five years of college teaching, and her experience as a faculty mentor in the Humanities Alliance this year. Our wide-ranging conversation informs this lightly-edited transcript of an interview I conducted with her over email. 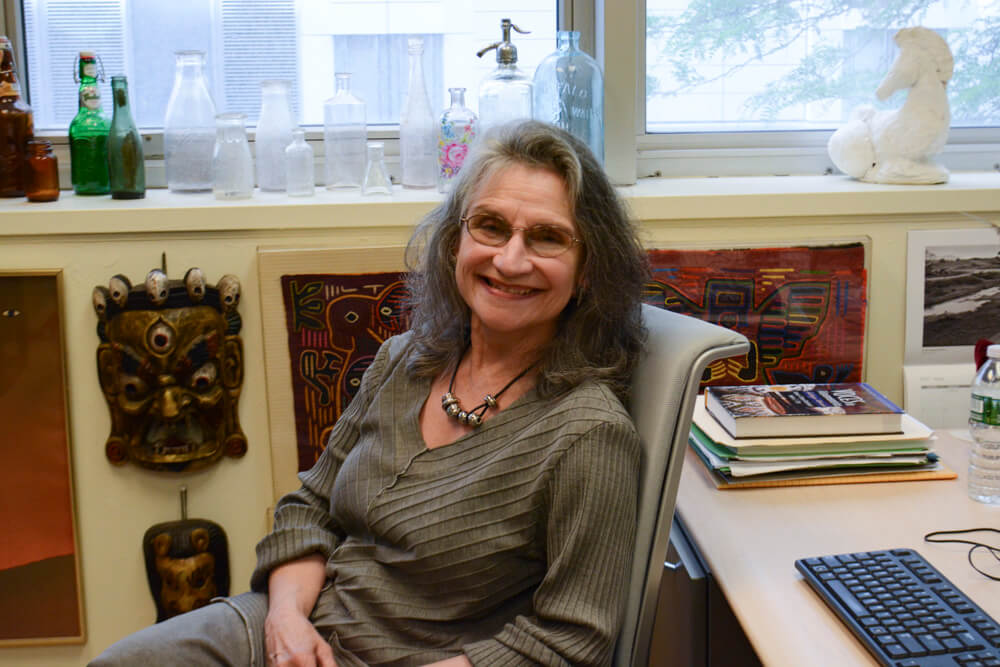 Prof. Ana María Hernández in her office at LaGuardia, May 2017. Photo by Kitana Ananda.

What has been your path to becoming a professor at LaGuardia CC?

Back in 1972, at least among students of contemporary fiction and poetry, chance (hasard objectif) as per Surrealist theory, was valued as much as planning—perhaps more.  So I can say that, as per Joseph Campbell and other Jungians, I “followed my bliss.”  I was finishing my doctoral courses at NYU when I met a classmate who was putting together the language program at this new CUNY community college in Queens, and she was recruiting faculty to create, develop and teach language and literature courses.  She had already recruited Max Rodriguez and she invited me to apply for an adjunct position to teach beginning language courses at the newly created division of Language and Culture at LaGuardia.  Max and I could both teach elementary Spanish, French and Italian, and did so for a few years.  Two years later, I was hired full time as an Instructor, and in 1976, I became Assistant Professor after I finished my doctorate in comparative literature.  I was tenured in 1981 and was promoted to Professor in 1985.  I chaired the Humanities Department at LaGuardia from 1984 to 1991, and in those years I was able to deepen my appreciation of the humanities in its various disciplines.

Teaching at a community college was a deliberate choice.  I had been teaching as an adjunct at Queens College and continued to do so after I started adjunct teaching at LaGuardia.  Open admissions at CUNY had just begun in 1970 and LaGuardia students were very different from the students I had taught at Queens from 1968 to 1972 in terms of academic preparedness. While I enjoyed teaching at Queens and could have applied there for a position after I obtained my Ph.D., I felt LaGuardia students needed me more because I had the patience to help them develop basic skills as they learned content, and I felt I had the opportunity to change the course of their lives in small and big ways, both in terms of academic preparedness and self-esteem, which is an important element in attaining success.  I watched students bloom as they learned to master historical and cultural contexts, and to appreciate the complexities of textual analysis.  That was one of the reasons I stayed at LaGuardia, even though I had several opportunities through the years to go elsewhere.

Why did you join the Humanities Alliance as a faculty mentor?

The goals of the Humanities Alliance, with its emphasis on pedagogy as well as a solid foundation in the humanities as a tool for empowering minority, diverse and disadvantaged students, reminded me of the goals of open admissions back in the early seventies.  Those goals inspired me at the beginning of my career and they rekindled the flame almost half a century later.  The recognition that solid humanities content can inspire students to “reach beyond their grasp”, as in the Browning poem, reminded me of what I felt when I first proposed the core of Latin American literature and culture courses as part of the first bilingual education teacher training program at LaGuardia back in 1974.  Now, as then, I am helping to shape teachers who will change the lives of numerous students, as I hope I have done over the past 45 years at LaGuardia.  I particularly rejoiced in Mellon’s choice of literature, rather than language courses, for the first year of this project, since that’s where deep learning of humanities concepts and structures takes place.  Bringing the works of six Nobel laureates to students and exposing them to the compositional and conceptual intricacies of great art have a transformative effect on students.

What has been your experience of mentoring graduate fellows in the program, and having them shadow your classes?

Rather than shadows, my two fellows, Luis Henao Uribe and Rojo Robles Mejías, have been accomplices, and at times protagonists, in my classes, and always willing collaborators.  From the second week, they participated by leading and moderating discussion groups, and by the time they taught their two classes, as per program requirements, they had been accepted as co-teachers by students in the class.  Our collaboration felt like the team teaching experiences I had had back in the seventies when I began teaching at LaGuardia, although the practice is no longer feasible for administrative reasons.

The program has also given me release time, which allowed for more time to work individually with students and to plan class activities with the fellows. These weekly meetings with the fellows resulted in at least three significant co-curricular events: a visit to the Philadelphia Museum of Art, arranged by Luis Henao Uribe, to view the exhibit “Paint the Revolution: Mexican Modernism 1910-1950”, which he had discussed in relation to his class analysis of a short story by Mexican writer Juan Rulfo.  For those who could not attend the Philadelphia exhibit, we offered the option of a visit to the MoMA for the exhibit of the French-Cuban artist Francis Picabia, “Our Heads Are Round so Our Thoughts Can Change Direction,” whose visual complexity parallels that of the poetry of Vicente Huidobro,  also analyzed in class.  These two activities resulted in a third joint mentor/fellow/student collaboration in a panel as part of the third  Latinx at LaGuardia Symposium on April 3, 2017, organized by Joy Sánchez-Taylor (Assistant Professor of English at LaGuardia) who had encouraged faculty/student panels as part of the annual event. Students Vivian Reyes, who had written a report linking the Philadelphia exhibit to the story by Rulfo, and Mariajose Racedo, who had compared Picabia’s and Huidobro’s combinations of texts and images in their modernist works, joined one of the fellows, Rojo Robles Mejías and myself at a panel on “Perspectives on Latinx/Latin American Literature, Art, and Film”.  This was an inspiring collaboration for all involved, and immensely beneficial in getting students used to the process of preparing a project for delivery to wider audiences within an academic and professional context.

What is one thing you have learned about your own teaching by serving as a faculty mentor?

Learning never stops, even after 45 years in the profession. Luis and Rojo (the two fellows in my class) each had different and complementary theoretical approaches to the study of contemporary literature; for instance, how film and fiction narrative techniques mirror each other in the stories of Horacio Quiroga, or how the full complexity of historical events such as the Mexican Revolution becomes apparent when analyzing the stories of Juan Rulfo.  Their approaches complemented mine, which is rooted in archetypes and myth structures across cultures and their artistic productions.  This plurality of approaches enriched our classes, as mentor and fellows took turns in moderating and leading small group discussions of assigned texts.

What advice would you give to a future community college teacher?

I think the best advice I can give future teachers is to let humanities content guide the development of student skills, and not the other way around.  When students become enthralled by the magic of great art, they strive to organize their thoughts and convey them in a manner that meets those rubrics that guide our teaching and that we use to measure their accomplishments.