*The following essay on early Black and Latino cinema was presented as part of LaGuardia Community College Latinx Symposium on April 3, 2017 at Poolside Café. In the panel called “Perspectives on Latinx/Latin American Literature, Art, and Film” participated faculty professor and Humanities Alliance mentor Ana María Hernández, LaGuardia Community College students Vivian Reyes and Mariajose Racedo and me, Rojo Robles, adjunct instructor and Humanities Alliance Mellon Fellow. The panel and the event, among other things, was an opportunity to showcase collaborations between the different groups currently participating in the fellowship.  Enjoy!

Juano in the Movies: Juano Hernández’s collaboration with Oscar Micheaux and the Inscription of Afro Caribbean actors in Early American Cinema 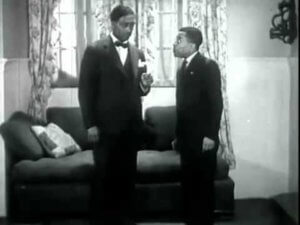 Puerto Rican Juano Hernández was the first Afro Latino actor to work in American Cinema. When discussed by film historians, the emphasis is on Hernández breakthrough role in Metro Goldwyn Meyer’s Intruder in the Dust (1949). However, his time working with pioneer black filmmaker Oscar Micheaux in the 1930s is either ignored or mentioned as a quick fact. Taking in consideration this lack of attention, this presentation will examine Hernández’s role in Micheaux’s barely discussed sound era film The Girl from Chicago (1932). For Hernández his role in this film signified his only opportunity to perform in an Afro Caribbean role -something still scarcely seen in American Cinema.

When discussing Hernández’s work is important to note that his career was always connected to the African American entertainment community. After Hernández migrated to the United States he worked in vaudeville, minstrel shows, and later on in all-black Broadway revues and as a scriptwriter and actor in black radio shows. Oscar Micheaux offered him his first role in movies portraying a Latino in black Harlem. Possibly, this was one of the first times, if not the first time, that these two communities were linked together in film. While definitely a landmark moment, Hernández collaboration with Micheaux set also the paradigm of representing Latinos as criminals.

By thinking of Juano Hernández’s role I will interrogate it’s significance, both in terms of Micheaux’s difficult and at times contradictory discourse on Latin Americans, but also in terms of his pioneer trust in Afro Caribbean performance and representation in American narrative cinema. Even when it is a secondary role, the presence of Juano Hernández in this film denote a groundbreaking moment of the Puerto Rican and Caribbean diasporic film history in the sense that it inaugurates a collaboration with Latino actors and moreover Afro Caribbean actors in the US.

The Man from Harlem

The Girl from Chicago presents two interconnected cases solved by the suave secret agent, Alonso White. In the first case his job is to put in jail a Mississippi gangster, Jeff Ballinger. While working in the case Alonso meets and falls in love with Norma Shepard, a young woman who recently became a teacher under the protection of Ms. Mary Austin, a boardinghouse manager. Harassed by Ballinger, Norma finds herself entangled in a net of shady relationships that include Mary and Liza Hatfield, Ballinger’s lover. Alonso apprehends Ballinger after a couple of violent altercates. After solving the case, Alonso proposes to Norma and they leave for Harlem. In the second part of the film Norma reencounter both Mary and Liza. In Harlem Mary have become a gambler and Liza an exotic cabaret singer now married to Gomez (Juano Hernández), a Cuban who is head of a numbers racket. After a couple of convoluted situations, Mary is prosecuted for the murder of Gomez and sentenced to death. Alonso believes her innocent and by seducing Liza, the real killer, he gets a confession and the necessary proof to liberate Mary.

Many of the recurrent themes of Micheaux’s filmography are present in this crime film. The heroes Alonso and Norma represent uplifted educated black citizens serving the country, Alonso as a law enforcer and Norma as an educator. Migration to the North is present as well. Just like in Within Our Gates (1919) the South is presented as a suburban traumatic environment. Education networks for the black community are still in a phase of development. Corruption and illegal activities are integral to the space, but criminals, at least for Alonso, seem easy to put into justice.

On the other hand, Harlem is presented as a fascinating place full of cultural vitality. Micheaux presents jazz and vaudeville as vital components of black culture. He offers a complex porous vision. Harlem is also home to vices and criminal behavior. As film scholar Paula Massood proposes: “bars, cabarets, and gambling dens of the city [are] elements that define the urbanscape’s bad environment and drag down individuals…” (54). The simultaneous presence of uplift middle class characters with low life ones creates a complicated picture of urban life. If Harlem is, as Massood argues, the embodiment of an idea, a trope that denotes the upward possibilities of an African American metropolis in the imagination of the audience (60), it is simultaneously a locus for crime and wayward deeds. Juano Hernández’ s character, Gomez, is part of the corrupt side of Harlem. He is a “numbers” dealer. In his essay “Our Newcomers to the City” historian Davarian L. Baldwin contextualize this urban figure:

During the Great Migration and segregated urbanization, black immigrants from the Spanish- and English- speaking Caribbean and migrants from the deep South brought versions of “policy” and “numbers” (now legalized as state lotteries) to urban centers. The 1920s witnessed a reenergized interest in lottery gambling as a viable popular amusement and informal economy, particularly within socially marginalized communities. (176)

Gomez is shown from a dual perspective: on the one hand as part of the black underworld and on the other as an Afro Latino immigrant. I’m interested in discussing this last ethnic aspect.

Film scholar Ana M. López proposes a model of ethnographic interpretation that could be useful to revise Hernández’s character. While we can read this ethnic other in the film as a presence that provides local color, comic relief, or an easily recognizable villain, López suggest that by thinking of the filmmaker as co-producer in power of cultural texts, it is possible to reformulate the relationship with ethnicity. She argues that American cinema “does not represent ethnics and minorities; it creates them and provides its audience with an experience of them” (404-5). Following this argument, it is possible to say that Micheaux is not representing but intervening in a discourse and producing a criminal Latino subject.

In The Girl from Chicago, Alonso describes Gomez before the audience gets to see him. In a cabaret, Norma recognizes the chanteuse Liza from home and asks Alonso to whom is she married now. Alonso responds: “A Cuban, Gomez, a number banker”. With sarcasm Norma responds: “I see”. Alonso explains that Gomez makes a lot of money dealing with numbers. Norma then asks if he always pay when somebody wins. Alonso responds that he has to, in order to stay in business. It is dangerous not to pay. He adds: “But I don’t trust Gomez. He has a funny eye. He never looks straight at you.” In this conversation Alonso and Norma summarize what it’s going to happen in the rest of the movie. Effectively, Gomez will try to fool people and escape with the money. In the cabaret scene, Alonso describes Gomez as a deceitful character. To some extent the expression to have “a funny eye” refers to his general lack of honesty, but it could be read as an indication of his otherness. He also has “funny” manners and a “funny” accent. He is an outsider and thus untrustworthy.

In effect, on the first scene Gomez is arguing with the numbers collector about his “mistake” of accepting a $20 bet on a single number. Gomez is worried about the possibility of an unwanted win. The heated conversation permits the audience to comprehend how the numbers game is rigged, to introduce Gomez as a shady businessman, and thus, confirm Alonso’s suspicion. Here it is worthy to consider Hernández’s performance. Gomez speaks in Spanglish and broken English. Phrases like: “¿Qué e’ e sto?” [What it’s this?] “tonto” [fool] “no me digas más d’ eso” [don’t tell me more] are integrated to the dialogue. In the following scene a secretary informs Gomez that Mary won the big bet. He responds in Spanish. “¡Diablo, qué suerte… vete!” [Oh, the devil, the lucky ones… leave!]. In both scenes he mistreats his associates.

The editing in these scenes are thought provoking because, while black characters are presented in medium and close up shots, Gomez is always shown in a wide shot. As is generally conceived, medium and close ups are use by filmmakers to create identification with the characters. Hence, we can infer that Micheaux didn’t want to encourage any identification with Gomez.

For example in his last scene Gomez is seen in wide shot packing the money to leave Harlem for good. Liza, seen in a medium shot, enters his office, discovers his escaping plot, and demands him to share half of the profits with her. Gomez pretends to oblige and sweet-talk her in Spanglish: “Alright querida, whatever you say. Gomez: he likes you. You say: give me money, and he gives money; gives me bag, he gives you bag… but before…” After this exchange they both take their guns out, but is Liza who gets to kill him, leaving with a portion of the money. Meanwhile Mary, who was shown on her way in a car in a close-up, finally arrives in the wrong moment to collect her gains. She takes the rest of the money and falls for the crime.

Gomez’s “funny” code switching provokes misunderstandings. To a certain point it set him apart from the other black people from Harlem. His apparent lack of commitment and respect for his wife, Harlem associates, and clientele settles that he is a “mafioso”, somebody who brings the community down. Gomez could be considered a caricature of a Latino too.

In his book Straight Lick, J. Ronald Green studies the use of caricature in Micheaux’s films. Green explains that Micheaux considered ethnic self-criticism a priority. The fact that Micheaux was addressing a primarily black audience is very important to understand his approach (150). Green argues that these caricatures contribute “to uplift by criticizing the obstacles to uplift- negative images- and by figuratively excising them”. Green proposes that although some Micheaux’s caricatures are too painful, mean or thoughtless, they are part of Micheaux’s mission of “tough unrelenting criticism of his own group” (168).

Following these arguments, if we understand Gomez as part of the black community, the caricature could be considered a way of criticizing the amoral and greedy members of the urban black melting pot. People like Gomez are presented as obstacles for the uplift of the race, regardless of their nationality. He symbolizes the dangers of the city and attitudes of self-preservation against the advancement of the community as a whole.

Nevertheless, if we consider Gomez just as a Latino the inscription is more problematic due to the fact that contrary to the African American group there is no contrast in the film. While Harlem is presented as a multifaceted place where morally positive and negative Afro American citizens intermingle, there is no Latino counterpart for Gomez. As Ana M. López suggested about Hollywood films, Micheaux is not representing a Latino but actually creating a one– dimensional discourse on Latinos. To this day, the vision of urban Latinos as hustlers and petty criminals, just like Gomez, has not change a lot. Micheaux’s intervention has become the representational norm.

Having say all this, it’s important to note that, from a casting perspective, the decision of having Juano Hernández as one of the most relevant characters of the film, and even if as caricature, the inclusion of Spanish dialogues too, allows to understand how Micheaux trusted and to a certain extent encouraged the links between both the African and the Latino artistic communities. The inscription remains groundbreaking and it started a collaboration that lasted for many years.